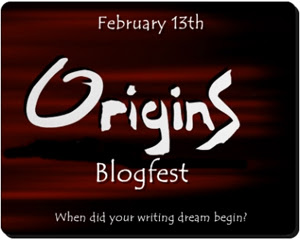 Today I'm taking part in the Origins Blogfest, so I get to tell you where my writing dream began.

Until I feared I would lose it, I never loved to read. One does not love breathing.

Harper Lee, To Kill a Mockingbird

Since today won't be a strict Others have said day, I get to cheat a little. See, the as much as I love reading, the above quote actually applies to me better if it referred to creating stories.

My love for stories is in my blood. By the time I was born, my gran had written and published and/or saw on t.v. a multitude of stories in my first language. So when I played with my cousin (with whom I grew up), we created stories. And characters. And plots. And descriptions.

When I was taught to read and write, my cousin and I started writing silly little books with single words per page that meant something to us. As we grew older, the play-acting continued, but we went our seperate ways when it came to writing. Still, there were few competitions (mainly poetry) that we didn't enter and win. I think I was nine when I tried to write my first movie script.

The one thing I did not lack was ambition.

The movie script (as happens with nine year olds) lost it's appeal to me, but in middle school, a wonderful thing happened to me.  I was required to write essays for two languages. At first, it was harsh going, but after my gran explained the basics, I started getting A's for my efforts. And I fell in love with the chance to record the dozen-a-day ideas I had milling around in my brain.

Still, as I continued to grow older, I got this keen sense of dissatisfaction. I started arguing with my teachers. Because my stories wouldn't fit into the word count stated. Other kids in my class tried to haggle the word counts down. I begged the teacher to give me more. I mean: who the hell can write an entire deep, complex story in 250 plus minus 10%? Were they kidding me?

That was when I started to think about just writing away from school. Fact was, school writing fixes were to small.

So sometime this month, ten years ago, I opened my first word document and started typing just for the hell of it. And I never looked back since. ﻿
Posted by Misha Gerrick at 3:44 PM

Email ThisBlogThis!Share to TwitterShare to FacebookShare to Pinterest
Labels: Misha Gericke, my gran, my past, writer, Writing