Me and some awesome bloggers have set some big/huge/crazy goals and we have a monthly bloghop where we let each other know how we’ve been doing. You can click here for the list of participants and to see what their goals are.

But before I get into that.

May 2015 be full of blessings for each and every one of you. 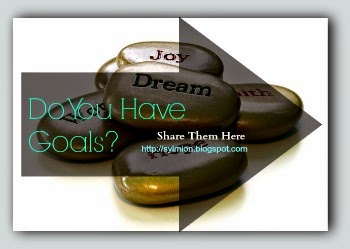 My goal is the one stated at the top of the blog. Earning $7500 in royalties per month, every month for a year, within the next five years. In other words, I need to start earning $7500 per month in January 2018 at the latest. To further explain, this isn’t about money. It’s all about getting me motivated to produce a long list of books that I’ve had pipe-lined for almost three years now. The idea here is that the more high quality books I produce, the more likely I am to eventually hit that $7500 a month goal. I picked the number that high, because the way I see it, I’ll still be happy even if I fall short.

Knowing this, I set a ton of goals for 2014, because I also figured that the sooner I published more, the better the odds of me earning that goal amount. Really, it’s quite sensible if you think about it. And I was sensible. I knew I wasn’t going to achieve most of the goals I set. The plan had been to maybe achieve five or six of them.

What I hadn’t expected, though, was that 2014 would be a year straight from hell. The publishing deal I’d had for two books (on of which had been published in 2013) went sour so spectacularly that I’ve had my trust in the publishing industry shaken to its foundations.

My personal/work life has pretty much shaken my faith in humanity at large.

I was so busy with surviving all that, I couldn’t ever really focus on my writing career like I’d wanted. Which means that of all the goals I’d set, I’ve achieved exactly two. I’ve managed to cut the majority of refined carbs and sugars out of my diet. Along with processed foods of all sorts. And I’ve been doing some needlepointing and crocheting. (The goal had been to do some crafts other than writing too.)

The diet one, I have to say, is a huge achievement. Doing other crafts… not so much. It was my survival mechanism. Infinite repetitions of the same motion, leaving me free to drain out some of the bad thoughts and emotions that had been bothering me all year.

So all and all, it could have been so easy to call this year a failure and mourn everything I’d lost. (And I’ve lost a lot.)

Because even though my goal score for this year looks pathetic, I know I’ve achieved a lot. Let me list the ways:


Despite my life often sucking so much that I often couldn’t even concentrate on the words in front of me, I read twenty five books this year.


I fought for and succeeded in regaining the rights to both the books that had been with my former publisher.

I still wrote over 150 000 words into rough drafts this year. I also wrote over 60k this month alone, although 40k of it was rewriting the western I’ve been working on.

I finished five rough drafts out of the seven I started with.

I finished rewriting about two thirds of the above-mentioned Western. For those of you who've been around for a while, this is the book I’d lost a few years ago.

Which brings me to this coming year’s goals:

I want to finish as many of the following as possible:

(For simplicity’s sake, I’m going to list my projects by the Acronyms I use for them, since that’s what I use on my year planners as well. Also, I haven’t gotten around to revealing some titles yet, and now seems like the wrong time.)

Publishing Edits (possibly for publishing in 2015):

Rough Drafts (The ones I do by hand):


Basically, I want to stick as close as possible to the year plan I have. This is what it looks like right now.

The minimum amounts of which must consist of:


5 books or plays in a language other than English.

5 classics other than Shakespeare, of which one must be Chaucer.

5 books by some of my blogging friends.


I seriously need to sort out my Social Media stuff. I haven’t been near active enough last year. What this entails, though, is something I still need to wrap my head around.


Help my family build our own house. (Yep, brick by brick.)

Sort out some sort of business that I can do on my own terms. (SO over trusting people to help me when they only help themselves at my cost.)

Seriously. I need to get back to singing.

Also, I really really want to paint this year. Other than the above-mentioned house’s walls.

Then, I want to continue with my more healthy diet, since it makes me feel good and gives me a lot more energy. (Useful when I’ll be lugging lots of bricks around.)

Last of all, and probably most importantly, I need to get past all the stuff that’s happened this year, so that I can get through 2015 with as little contamination as possible.


I think in 2014 I made a bit of a mistake not to draw more of my life into my goals. After all, I don’t think success will come without balance.

2) Finish final edit rounds for at least one of the three above mentioned books.

This should be what my January looks like, writing-wise:


Still having to postpone, pending me gaining access to reliable Internet.


Survive first month of building a house while still editing and writing.

Wow. That was a lot! Thanks to everyone sticking with me for the whole post. Now tell me. What’s your big goal for the year? Do you have a big/crazy/crazy important goal or dream that you’re working towards? Why don’t you sign up?

One more hiatus for the year...

Yeah... This one isn't one I have a choice about, though.

Remember when I said I'd move house in November? Well... that move is coming up tomorrow. And I'll be stuck without a reliable internet source for a while.

I say a while, because it's unclear as to how long it will take for me to get internet again.

No matter. This girl is planning on getting a TON of writing done this month.

Being me (and knowing that I'll have more time on my hands than I've had in almost six months), I've set myself the slightly insane goal for December of rewriting two novels (y'know, to get them on the computer) and rough drafting over 60k words. (Daily goal: 2k per day.)

The idea behind the 60k goal?

Well... I estimate that's what it's going to take to finish the five rough drafts I have left before year end. And then in January, I'll have a glorious time editing.

Also, if I can only finish two or three projects now, it can have a huge impact on what my next writing year will be like.

So wish me luck!

I hope to see you all again before Christmas.