Tamara on Acrophobia and Desensitization Therapy

Hey everyone! Today I want to welcome the lovely Tamara Narayan to my blog as part of her blog tour! Take it away, Tamara! 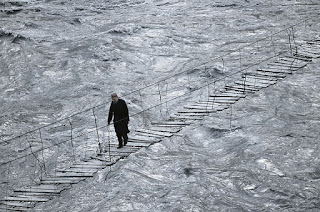 A donkey follows a huge, green ogre across a crumbling wooden bridge like the one pictured above, but over boiling lava instead of a river. The ogre advises the trembling donkey to keep his head up, but alas, a wooden slat falls away under his hooves, and the poor animal shrieks, “Shrek, I’m looking down!” 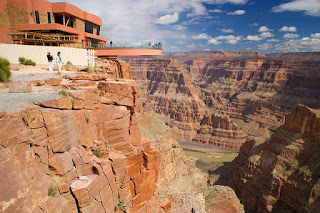 Approximately 2% of the population suffers from acrophobia, or an irrational fear of heights. Twice as many women are affected than men. (I couldn't find the stats for donkeys.) While most people feel a twinge of fear gazing down into the Grand Canyon or at the apex of a roller coaster, someone with acrophobia may have a full blown panic attack a few steps up a ladder. 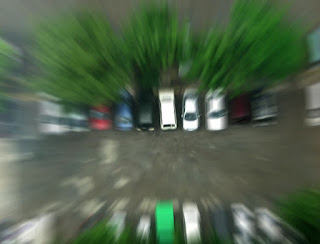 Vertigo is not another word for acrophobia. Rather, it is the sensation of movement (of the person or objects around them) when no movement has occurred. Vertigo can be triggered by looking down from a high place, which explains the confusion between the terms. For example, I'd get dizzy walking across a grate like the one below or any high place where I’m responsible for my balance. But looking out of the window of a plane? No problem. In fact, I prefer a window seat. So I experience vertigo even though I’m not acrophobic. 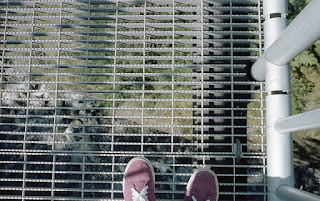 In my short story, One Step Away, Darryl James' life is ruled by extreme acrophobia. This affliction started early, when he was abandoned on top of the monkeybars while his entire class, including the teacher, went inside after recess. (This actually happened to me.)

As an adult, things only get worse. His wife leaves him after enduring things like hanging Christmas lights herself while six months pregnant and Darryl quitting his job after a departmental transfer to the third floor.

When his acrophobia puts his son’s life in danger, Darryl seeks help from a psychiatrist. Since he has a heart condition, medication or flooding (doing something extreme like jumping out of a plane) are not viable treatments. Instead, Darryl undergoes desensitization therapy or a gradual exposure to greater and greater heights. 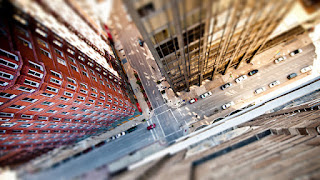 These days, Darryl’s psychiatrist might use virtual reality technology, but this story is set a bit too far in the past for that. To celebrate the end of his therapy, Darryl travels to a city with skyscrapers, where he’ll experience a relapse at a pivotal moment in history. To find out what happens, check out Heart Stopper and Other Stories, available at Amazon.com.

One dreams of feathers, wings of mightYet experiences terror at a meager height.This phobia takes every dear thing awayThen, in a brutal twist, saves a dark summer’s day.

About the author: From doling out movie popcorn to flinging smelt to penguins, Tamara Narayan’s career took the “road less traveled”. It veered off into a land of integrals and other strange things while she taught college level math, but these days she’s cruising the fiction highway. In addition to the Heart Stopper collection, her short story Scrying the Plane is in the IWSG anthology Parallels: Felix Was Here. Find her at www.tamaranarayan.com.

If you'd like to explore whether you have acrophobia or not, check out this YouTube video of a guy climbing a tower over 1700 feet high. Can you watch without flinching or feeling butterflies in your stomach?

Thanks for stopping by, Tamara! Anyone else Acrophobic? I know I am. When I was a kid, I was so scared of heights that I couldn't even comfortably stand on a choir bench. Which sucked, because I was tall, so I always got put on the highest one.
Posted by Misha Gerrick at 12:00 PM 17 comments:

Today is the last Friday of August, so it's time for another Update Day.

For those of you who are wondering what I'm talking about: Beth Fred and I host a monthly bloghop. A bunch of us have set huge/crazy/very important goals. On the last Friday of every month, we share updates on our progress (if any.)

You're welcome to sign up! You can find more information here, as well as see how everyone else is doing. 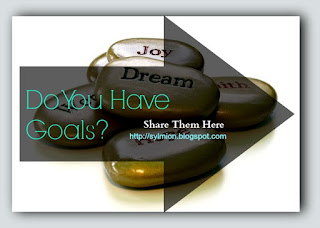 So how have I done?

Reading: Pathetic. I've only read a few pages in the beginning of the month.
Life: Uhm........ Let's just say the crap continues. Which means that:
Writing: 20k words, all of which except for 14 were written in the first two weeks.

I wasn't helped by the fact that I got a flu around the 14th.

It also feels like... since setting aside my major goals for the rest of the year, I've sunk into doldrums, the likes of which I haven't experienced since my time in university.

I guess, by abandoning my plans, I'd abandoned my hopes for my publishing career, and as a result, I no longer have the incentive needed to be productive.

Yes, I know what I've said before about not writing to publish. I stand by that.

But it's also a widely known fact that writing is difficult enough without staving off what might become a monstrous depression of a scope I've managed to avoid until now. It's difficult enough to write when everything else is going well.

And I'm not doing well. Not by a long shot.

And that's the truth beyond my radio silence.

People don't want to hear about the sadness, hurt and pain of others. So... it's best to try, at least, to limit posts about these things to a bare minimum while burying it in pep, promises, flowers and bunnies.

But when you're this tired... This hurt... this... hopeless. There. I've said it. Hopeless. All I've got left is a grim determination to survive.

That's not going to help me write, because right now, writing isn't giving me anything to eat.

And it's certainly not helping my social networking, because grim determination tends not to bring out the snappy tweets, inspirational quotes or wise, philosophical blog posts.

So in short, I'm basically incapacitated when it comes to writing anything the way I used to.

It's difficult for me to be friendly and funny and whatever else when I'm visiting other blogs, so I've stopped commenting because I hate writing a comment and feeling that that thing I've written just isn't me.

But I digress. Grim determination is really not a good place to be in when writing a book. No matter how difficult it is to write, I don't believe it should be done with gritted teeth and white knuckles. And for all of eleven days, I had a moment of peace within myself. That was when I wrote 20k words. Which is sad to think, because at that rate, I could have written 60k if the peace had lasted.

Maybe, things will turn around and I'll regret my apathy toward writing later when I'm way behind (which I am already to the point where falling more behind hardly matters) and suddenly have the opportunity to publish again. But to be honest, that seems like the best case scenario right now.

How are you doing?

Sorry for the sudden and inexplicable radio silence. The plan had been to check in regularly, but my life is seriously cramping my style at the moment.

I'll be back on Friday, though, to share an update on my monthly progress.

Just didn't want to wait until then to post something.

How are you doing?

It's the first Wednesday of August, which means today is officially time for an Insecure Writer's Support Group post. (Click here for more info.)

Yesterday, I posted the precise kind of post I was going to write for today, so I thought I'd bend the rules a little and ask you to visit me at Untethered Realms.

I hope you're all doing great today!