Believe it or not, it's the last Friday of the month, which means it's time for another Update Day. Since this post is about me finally setting my goals, get ready because it's going to be a long one.

To help you out, the first part is about how I'm doing and what I've been up to in February. Then at the first subheading, I start talking about how and why I set my goals.

I have to say, I'm feeling rather frustrated writing this. We're two months in and it still feels like I haven't really sorted anything out yet. I haven't been able to write since stopping in January.

It's just that nothing seems to fit into my days anymore except for work. I mean, I've decided on my goals at the end of January and have been keeping track of what I'm doing, but when I look at my "done" list for this month, it's all work-related with a few things like "unpack laundry" sneaked in.

Yeah. Right now, I'm still so busy that putting laundry (that I didn't even wash myself) into a cupboard is not a chore, but a daily goal.

So I'm finding that a tiiiiiiiiiny bit frustrating.

That said. I haven't only been working. The truth is, I feel like I've burned out last month much worse than I wanted to admit at the time. So much so that when I feel even a little tired (like after I've finished my work day), I just can't make myself write a much as a blog post, never mind working on fiction.

Instead, I've been working on some crafts. One of my best friends is expecting her second baby, so I'm busy crocheting a blanket. And when I don't feel like crocheting (because it's a bit less than nice to work with wool when it's this hot), I've been working on my needlepoint tapestry. I don't know if you guys even remember the one I'm talking about. I started it like three years ago.

It's a 138k-stitch monster of a thing. But I just felt like I wanted to work on it, so that's what I've been doing for fun. I'm finding it really soothing too, because it makes me not think about anything. How? 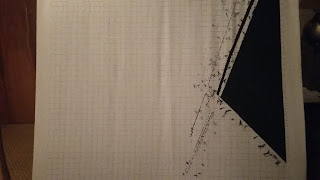 See those little ants running down one side of the black blocks, those are individual stitches. I'm working from a chart, and that means for every stitch I'm making, I'm counting up or down and then left to right. If I don't do that, I put the stitch in the wrong place, which is seriously going to suck because it's not really something that's easy to fix later. Because fixing a needlepoint tapestry stitch means ripping it and all of the other stitches I made with the same thread out and starting again.

But I digress. In January, I promised to share more information on my goals once I decided what they are, so here's what I did.


Starting Big and Drilling Down

Starting off, I decided to set multiple 5-year goals. These give me the framework of "Where do I want to be five years from now?" Some of them, I'm hoping to achieve in a shorter time, like my income goal, because I have already actively been working at that for a long time already. These goals are meant to be ambitious and can be as nebulous and "impossible" as I like. Why? Because the idea is to drill down into each one and find the things I can do daily to make them more possible.

My Five-Year Goals Are:

1) Earn $7500 a month from my writing and publishing skills
2) With a third of those earnings coming from publishing my own writing
3) Be healthier
4) The start-up I'm working on will be off the ground and self-sustaining
5) Do more art (that isn't writing)
6) Read more
7) Speak seven languages proficiently (if not fluently).

One thing worth noting here is that three of my goals is about "work" and three are about "don't work all the time, kid." It's basically about me looking to find a sense of balance. I can set up to ten of these goals, but for now I don't really want to do that because I think all of these goals are pretty big and all/consuming. So these are the ones I believe I can manage chasing at the same time.

From my five-year goals, I narrow down to my one-year goals. Now here is where I start to make my goals SMART.

For those of you wondering what SMART goals are, SMART is an acronym, which stands for:

Mostly my goals are specific, measurable, achievable, reasonable, and time-based.

In other words, by drilling down from my five-year goals, I take things that are mostly out of my sphere of control and doing the things I can control. Because each step I take brings me one step closer to making those impossible things possible.

The top three goals are all writing goals, because right now, the own-writing side of my career is more of a priority right now and together they are aimed to add to my first two five-year goals.

I set the goal of 12 books because that equates to one book a month, which feels doable, even if it is somewhat of a stretch.

Given the approach I've taken to losing weight, I'm probably not going to hit my goal weight in one year, but I hope to at least be in a lower health-risk class be the end of the year.

My art WiP will probably be the baby blanket I mentioned, because that has a June deadline. But if I do achieve my art goal, I'll probably just set another.

With regards to improving my French and also my seven-language goal... I already speak four languages. In order of proficiency, those would be English, Afrikaans, French, and Mandarin. However the French and Mandarin are really more faded memories because I don't practice them enough. So the idea is for me to freshen up those two first before I move on to my next languages to learn. I'm still a bit torn on what I want those to be. I can go a really easy way and go for something like Dutch (which is close to Afrikaans), Spanish (close to French), and Italian (close to French and Spanish). Or I can go for more useful to me, which would be Spanish, German, and Arabic. Or I can just go be really random and go for something like Norwegian, Japanese, and Gaelic. I'll see what I feel like when my French and Mandarin are up to scratch again.

I try to limit the number of my quarterly and monthly goals to around five each, as it's more about focus than anything else. Weekly and daily goals can go up to ten each, and can relate to any of the bigger goals I've set.

So for example, even though my yearly goal is about my weight, I can set a daily goal that's about my mental health because it relates to my five-year goal of being healthier.

But since my quarterly goals are pretty much impossible, given that I couldn't do anything towards them for two of the three months, I'm going to skip to listing my monthly goals.

1) Finish the freelance editing job I was booked for.
2) Write/edit 10,000 words.
3) Crochet 21 afghan squares for the baby blanket
4) Finish unpacking (yeah six months in and I'm still not done.)
5) Read one book

So with the writing/editing goal, I'm not really being specific yet because I just want to get back into writing again. Once I can get into that routine, I can get back to focusing on any one project.

With regards to reading one book, I'm actually in the middle of two books. One I'm reading for work (but also because it should benefit my writing/publishing goals) and one is in French, so either one I read will actually contribute to more than just my reading goal, which is handy.

Bu yeah. I've finally set myself some goals. Now it's a matter of figuring out how the heck I'm going to achieve them.

What about you? Do you set SMART goals? How's your year going so far?
Posted by Misha Gerrick at 11:21 AM 18 comments: