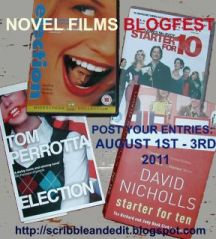 For today, I decided to go a little off the beaten track with the Novel Films Blogfest. I love reading and watching movies, pretty much equally. So one would think that I would enjoy adaptions.

More often than not, I don't.

And this blogfest got me wondering why.

And this is what I came up with:

1) I generally don't like focus shifts. So if we move away from the story for some big budget special effects, I will hate the movie. I'm looking at you Harry Potter franchise.

2) If the movie veers from the story, but still manages to keep the essence (or my sense of it), I'll love it. For example, Sherlock Holmes with Robert Downey Jr.

3) I don't care if the actors are famous or unknowns, but I care when they can't carry the role. Probably why Julius Caesar with Marlon Brando as Marc Anthony is still one of my favorite movies. Also, it pretty much stuck to the plot.

4) I don't care if the book is a bestseller, if the entire story hinges on a massive plot twist, putting it on film might not be a good idea. Because if the ending is changed, I'll probably hate it. If it isn't, I'll spend about two hours bored. Except if the actors are brilliant. And even then I probably won't care. Tom Hanks and Ewan McGregor in one movie. Should be a winner, right? Not if everyone who read the Da Vinci Code decided to read the book before it. And not if the real villain is named in every publication out there. Think about it. It could be possible that fantasy novels and sci fi adapt because of this. I mean, sure there are twists (and I'm building up to a big one), but when it comes to epic, the twists sort of aren't the point.

5) And finally, books with either very minimal description (where the visual is open to interpretation) or where everything and everyone is described almost exactly adapt better. Because then people who read the book first won't have a "huh?!" moment. That's why I think that Chronicles of Narnia adapts well. C.S. Lewis style fosters it. Readers know of everything that's there, but not in such detail that seeing something in the movie is jarring. Also it's pretty hard to miss the essence of what Lewis wanted to say. Even in adaption.

That's my take on it, anyway. What's your opinion? Am I writing nonsense or did I miss something else? And yes, I am aware that I'm being very controversial about the HP franchise. But that's only my example, not necessarily the point I'm trying to make...

P.S. Sorry if the picture appear on the right. Wasn't in the plan. But alas the words "Align Left" mean nothing to Blogger. :-/
Posted by Misha Gerrick at 11:11 PM