Hi everyone! Thanks for stopping by. Today I want to welcome the lovely T.F. Walsh to my blog as part of her tour for the release of her book, Cloaked. Take it away, Tania!

All Things Cryptids with T.F. Walsh

Hi and thanks for having me on your blog today.

CLOAKED is written as a Paranormal Romance, but what is paranormal exactly. Paranormal is anything that is considered to be outside science's ability to explain or measure. Unlike the supernatural, the definition of paranormal doesn't preclude its existence, it just presumes that we don't have enough evidence either way. I love learning about paranormal subjects as much as I enjoy writing about them.

My favorite subject of paranormal are Cryptids. Cryptids are any form of animal or creature that is either extinct or has not had its existence confirmed. Including extinct creatures like dinosaurs alongside creatures like Bigfoots, the Loch Ness Monster and werewolves is a telling definition for me. Just as many people believe that some species of recently extinct animals like Tasmanian Tiger may still be alive in hidden pockets of forest, many others believe that Sasquach may by hiding in remote areas of wilderness.

Ghosts, spirits and demons are another subject of the paranormal that fascinates me. More and more science and pseudo-science is being directed to investigating this area of the paranormal. And increased interest from pop culture has seen more television and other media devoted to these investigations as well. Another subject of paranormal is aliens, and just because there is no evidence doesn't mean that they don't exist. Just that we still haven't found evidence.

What do you believe in that supposedly doesn’t exist? 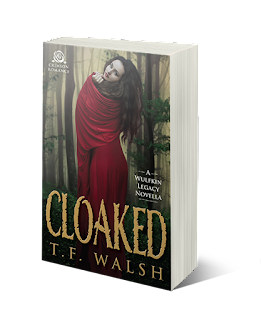 Raised by an overly protective wulfkin pack, Daciana leaps at the chance to venture into the human world for her one-year independence ritual. But after someone steals the endangered bear cubs she’s been assigned to protect, she must locate them or lose her job and return home in disgrace. The sexy inspector on the case isn’t making this any easier. He knows nothing of her kind, and wulfkin rules forbid relationships with humans.

Newly divorced Inspector Connell Lonescu trusts no one but himself. He’s convinced relationships are a waste of time and thinks burying himself in work will ease the pain. Yet he’s attracted to the gorgeous and mysterious Daciana, even if there’s something slightly odd about her. Can Connell learn to trust the sexy but secretive woman?

Cloaked is the prequel to Cloaked in Fur, book 1 in The Wulfkin Legacy Series. Find out how Daciana and Connell fell in love and set in motion the paramount events that forever change their lives and those around them. 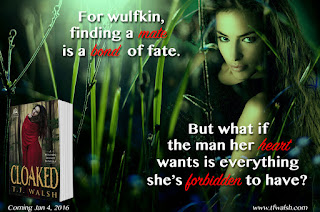 Sign up here for T.F. Walsh’s newsletter to keep up to date with latest releases, special offers, and exclusive content.

T.F. Walsh emigrated from Romania to Australia at the age of eight and now lives in a regional city south of Sydney with her husband. Growing up hearing dark fairytales, she's always had a passion for reading and writing horror, paranormal romance, urban fantasy and young adult stories. She balances all the dark with light fluffy stuff like baking and traveling.