Hi all! So this was most certainly not in my schedule, but on Friday, David mailed me. One thing led to another, and we did an interview over the weekend that I decided to share today.

Before I get to that, though. If you haven't seen my announcement on Friday yet, please go check it out. I'd love you forever if you could help.

Okay. That's done. Let's get to the interview, shall we? (Bold bits are by me.)

Welcome to The Five Year Project, David! Let's start with an easy (or fiendishly hard, depending on your point of view) question. Tell the readers a bit more about yourself?

Much about be can be summed up by the words of Jake the Dog: "I'm just a simple dude." I love all things science fiction and fantasy, and I write all kind of things. I happen to be a mental health professional as well. You could say I'm a mixed bag of tricks with dollop of awesome on top. Plus I live in the Rockies. Like Bilbo, I gotta have my mountains.

You've got a dollop of very awesome on top. ;-)

Do you use your mental health knowledge in characterization? How? Is it something you do consciously?

Always. In fact, when I was in college going for a Behavioral Science degree, people were surprised that I wasn't going for a degree in English since I wanted to be a writer. But here's something I've learned ... If people are invested in the characters, the prose will take care of itself. Having a background in the field of psychology makes complex character creation a cinch. It makes me a more effective people watcher, too. Don't call the cops on me.

I LOVE people watching. Bonus points if I don't get caught. Do you make up stories about the people you notice?

Usually, but it can take a lot for something to grab my attention. Even The Undead Road is something of a caricature of my 15-year-old self, using memories of events and people I knew back then.

What inspired you to write The Undead Road?

Zombies are my favorite monster, yet for the longest time I couldn't think of a way to write them the way I've always wanted to see them (more family oriented and presented in a way that people who don't like zombies would still enjoy the story). The first episode of The Walking Dead was huge in breaking that wall, and I wrote the first chapter that night.

So would you say this was an easy story to write?

I would say the easiest of all my works. It flowed like water. Perhaps I wasn't approaching it as seriously as other projects and just had fun writing it. Then my critique group liked it so much, they pushed me to get it published. And here we are!

I love when a story like that comes along. I adore my challenging books, but sometimes, it's important to just let something flow out too. Even if we don't take it as seriously.

What is The Undead Road about and where can people buy it?

It's about a 15-year-old boy named Jeremy, whose family is seeking refuge from the deadly Vectors halfway across the country. They have to get there first, and find themselves caught in the struggle for a possible cure and a girl who might turn on them at any moment. You can find The Undead Road on Amazon: Kindle (.99 all this week!), free on Kindle Unlimited, and paperback, as well as the Createspace store.

Sounds awesome. Where can people find you?

Do I want to be found? Hey, why not! You can find out what I'm up to at www.davidpowersking.com, as well as Facebook and Twitter. Follow the space guy with a cruller in his hand.

Excellent. Thanks so much, David! All the best with The Undead Road. 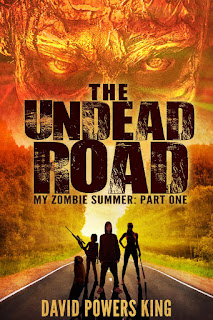 Nothing brings the family together like a zombie apocalypse …

Fifteen-year-old Jeremy Barnes would rather watch a zombie movie than shoot a real one, but he has no choice if his family wants to survive the end of the world. Their plan? Drive across the infected United States to a cabin in the Colorado Rockies without a scratch, but their trip takes a complicated detour in the middle of Nebraska when they find Kaylynn, a girl who can handle a baseball bat better than Jeremy can hold a .45 Berretta. And when they stumble into a sanctuary, Jeremy soon learns that Kaylynn is stronger than she looks—a deadly secret lies inside her.

After the radio picks up a distress call from Kansas City about a possible cure, Jeremy’s parents go with a team to investigate. They never return. The only way to find their parents is for Jeremy and his sister Jewel to rely on a dangerous girl who might just turn on them at any moment. 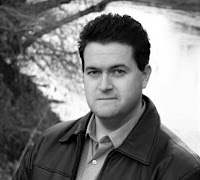 David Powers King was born in beautiful downtown Burbank, California where his love for film inspired him to be a writer. He is the co-author of the YA fantasy novel WOVEN, published by Scholastic. An avid fan of science fiction and fantasy, David also has a soft spot for zombies and the paranormal. He currently lives deep in the mountain West with his wife and three children.

What about you, dear reader? Which is your favorite monster? Who loves zombies?
Posted by Misha Gerrick at 12:00 PM