How I set huge goals without getting crushed by them.

Friday's post got two comments by J.H. Moncrieff and Kelly Hashway (both ladies have awesome blogs, by the way), which basically came down to "How do you keep getting so much done?" and "How do you handle your discouragement if you achieve your goals?"

Since it isn't the first time people asked me, I thought I'd go into my madness/method once more. Actually, I'm going to share my big secret:

I set huge goals and then make a game of chasing them.

If I think about it in an attempt to explain myself, it's a lot like a perpetual game of soccer/football/rugby/whatever else you can think of involving points. Or maybe I'm playing a game of Quidditch, because I remember that some of those go on for a while. The only thing here is that I'm both sides. Misha the writer/doer-of-things vs Misha the procrastinator.

The more things in a day, the more times I score. And yes. I keep track. 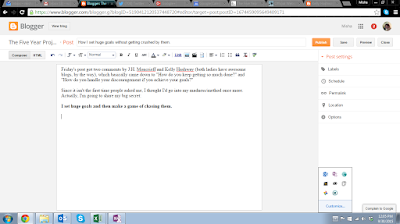 If you look closely, you'll see I have two Excel spreadsheets open. I open them up the first thing every morning.

The first is this one:

This is where I keep track of my writing/editing goals by month. This was September, but at the end of each year, I create a spreadsheet for the next year. (2016's is done too. I did it this month to take a writing break.) Basically, it started as a way for me to keep track of my rough draft's word counts and daily progress during NaNo, since counting by hand is a bit of a pain in the butt, so it's easier to only count toward the total and then subtract to find what I've written in a day.

The big block on the left is for rough drafts and rewrites and the block on the right is for my edits. (I count edits by hour instead of words.)

I have another block each month for critiques, but including it just makes the whole thing too small to see. Anyway, on all of the blocks, I color-code my progress so that I can see at a glance what I've been doing. I can also input monthly writing and editing goals (say 10k words and 15 hours respectively), and the spreadsheet calculates my totals, cumulative totals as well as daily goals and cumulative totals. In other words, this thing helps me keep track exactly the same way as NaNoWriMo's stats do.

The other spreadsheet I have open looks like this:

The words are pretty squidgy so it might be hard to tell, but you're looking at the month of September. Each color-line in the calendar other than turquoise represent particular monthly goals I've set. You know the ones. I set them on this blog on the last Friday of every month. The key to those goals are in the multi-colored blocks at the bottom. I try to keep themes. (Such as the Purple involves stuff I still have to do for The Vanished Knight. The dark green was for all my writing this month. Yellow was for my reading (and to count the average hours spent reading) and orange are my life goals.) Every theme/color has a primary, secondary and tertiary goal, as well as a space for me to mark them as in progress or complete.

In other words, this little bad-boy is my score card. The things written in on the calendar aren't a to-do list. They're everything I've done. Every day. Saturdays and Sundays tend to be emptier because I let myself rest, and also because they're spent on less quantifiable things like spending time with my family or binge-watching series to recover from my hard work.

This month, everything except for eight tasks (out of 24) had me making at least some progress (two of which were postponed due to circumstances beyond my control.) Of the remaining 16 tasks I set myself this month, I completed 4 plus a bonus task for that rough draft I hadn't set a goal for, so 5. Of the 12 remaining, I made significant progress on one. So all in all, I might not have finished the majority of my goals, but so what? Everything I did only sets me up to finish them next month or the next or whatever. But in the meantime, I know that very few of my weekdays (six) went without me furthering my writing goals in some way, and I compensated for those by working in on Saturdays.

Also, to help keep things balanced, a quick glance at my word-count reveals that though I didn't achieve everything I set out to do, I still finished a whole round of edits, a full rough draft and about a third of my planned rewrite in one month.

In short, I won this round by a wide margin. Starting tomorrow, I get to see if (and how far) I can win again.

And yes, this came is huge fun. There's nothing as awesome as marking things as complete when you have things to do and goals to achieve.

What about the bad months? Oh I have those too. Usually, what I do is I focus on what I have achieved. (I almost always get something done.) Also, it helps me to keep a long term view in mind.

How long-term? Well. The Five Year Project runs from 2014 to 2018, but the timeline I have (the one I always post on my update days) have projects pipelined. And to give you an idea, this is what the Project looks like visually at this moment. (Each row is a project, each column is a month and each block is a year.)

Each orange block means something's been (or will hopefully be) published. If I can just get half of next year done, I'll be a happy camper, and currently, I'm pretty much set to get there. All those tasks that didn't quite get done in any single month still add up to me finishing things, so there's no reason to worry about any supposed failure. There are no failures here. Only failure to do things, and I know I will get to them at some point.

What about you? Do you set goals? How do you keep track of them?

Posted by Misha Gerrick at 2:04 PM

Email ThisBlogThis!Share to TwitterShare to FacebookShare to Pinterest
Labels: Goals, how to work on multiple projects, writer, Writing