Hi all! Today I'm welcoming one of my blogging buddies Meradeth Houston to the blog as part of her blog tour. She's awesome, so do go over and say hi.

Thanks so much for hosting me today, Misha! It’s always a treat to be on a fellow author’s blog. I thought I’d talk a little about antagonists and creating a really fun one. Well, maybe ‘fun’ is the right word, but one that gets under a reader’s skin in all the best ways.

So, I’ll admit that I love a good bad guy/gal. Maybe that’s a little twisted, but it makes me a whole lot more invested in a book. Some of my favorites come from Harry Potter. Of course we have Lord Voldemort, who is obviously evil. I mean, we get that. And his back story allows us to understand how he got that way. But while we don’t like the wizard and want him gone, there are some other antagonists that really irk a lot of readers. Let’s be honest, I think anyone was upset with what happened to Dolores Umbridge. Why? I think it has a lot to do with the fact that we’ve all had people like her in our lives. I’ve read some great articles about how people project that mean teacher/boss/whoever that was out to get them on Umbridge. So, what this boils down to is a way to connect personally with the antagonist—that really helps make them leap off the page.

For another Harry Potter character, let’s take Snape. The guy’s got some issues. He’s done some dumb stuff. And to be honest it wasn’t until the last book that I came to terms with the guy. The rest of the time I kind of thought he needed some psychological help (though I had some serious discussions with people who saw the good in Snape from the beginning). Anyhow, what changed my opinion? What made Snape that layered character that would be so incredible? His story. Learning about what got him to the troubled spot he was in, in such heart-rending detail, made me feel sorry for him and understand what drove him. And it wasn’t just hate and bitterness like Voldemort—nope, it was love and having to live through loss. Such a good story. But this boils down to seeing the inner conflict of the antagonist and understanding why they’re that way, to the point that on some level you might want them to succeed. I mean, sure, rooting for the hero might be obvious, but the antagonist has a point, too.

So, the reason I bring this up is because Joan, the antagonist of Travelers, was kind of tricky to write, because all the way through the story I found myself almost wanting her to get her way. She didn’t like the rules she had to live by because it meant her twin died, so she did something about it. And she did an amazing job. But there were consequences that made what she did pretty horrible for Sienna, the story’s hero, which is what plays out in the book. Still, Joan’s attitude had a completely logical foundation, one based on ideas I could understand and sympathize with, so there were a few times when I thought about letting her “win” while writing. The role that Joan plays in the book is one I really enjoyed exploring…probably because I love a good bad guy.

Who’s your favorite antagonist from a book or movie? 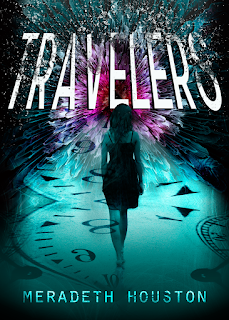 Sienna Crenshaw knows the rules: 1) no time traveling beyond your natural lifetime, 2) no screwing with death, and 3) no changing the past. Ever. Sienna doesn’t love being stuck in the present, but she’s not the type to to break the rules. That is, she wasn’t the type until her best friend broke every one of those rules to keep Henry, her twin brother and Sienna’s ex-boyfriend, alive.
Suddenly, Sienna is caught in an unfamiliar reality. The upside? Henry is still alive. The downside? Sienna’s old life, including the people in it, has been erased. Now, Sienna and Henry must untangle the giant knot in time, or her parents and all the rest of the Travelers, will be lost forever. One problem: the only way to be successful is for Henry to die.

Pick up a copy here!

Meradeth's never been a big fan of talking about herself, but if you really want to know, here are some random tidbits about her:

>She's a Northern California girl who now braves the cold winters in Montana.
>When she's not writing, she's sequencing dead people's DNA.
>She’s also an anthropology professor and loves getting people interested in studying humans.
>If she could have a super-power, it would totally be flying. Which is a little strange, because she's terrified of heights.