Hey everyone! Today I'd like to welcome Libby Heily to The Five Year Project. She's here to tell us about where her newest main character, Grape, came from.

Take it away, Libby!

The Birth of Grape Merriweather

Welcome to Sortilege Falls is my second novel. My first, Tough Girl, was about an eleven-year-old who is bullied and starving and loses herself in an imaginary world to combat the misery of her life. I wanted to write something happy after that and WTSF is about as “happy” as my writing gets. The idea was to come up with a main character whose very name sounds like a smile, thus Grape Merriweather was born. Stories grow and writers hardly ever end up writing the book they intended. That is definitely true with WTSF. My “happy” story grew to encompass the themes of beauty worship, celebrity, as well as delving into the mysterious relationships between child stars and their parents.

But I tried to stay true to my original idea of Grape. She’s not without her troubles and woes. In the beginning of the novel, Grape is new at school and eager to impress. She spends over an hour the night before trying on outfits to find the perfect one. But she is ignored by students and teachers alike. Everyone is too caught up with the beyond gorgeous models to bother with one new student. The more time passes, the more Grape realizes that Sortilege Falls is not what it’s cracked up to be, and she’s going to find out why.

We discover this weird world along with Grape and I tried to stay true to her voice. It was very important to me that Grape wasn’t perfect, that she partially fell under the Models’ spell. She fights throughout the novel to make her own decisions and not bend to the Models’ will.

Hopefully, Grape comes across as a complex character. She stands up for herself and her friends but she also senses social pressure and makes awkward comments to try to fit in. She wants friends and to be liked. Don’t we all? But she won’t allow herself to be pushed around either.

But maybe explaining Grape isn’t best. Maybe I should let you meet her instead.  Below, we see Grape deal with a potential stalker.  It’s late at night and Grape has just watched as her brother, Brad, heads into the woods to take plants (Brad is huge into botany).  Graeson, the only kid at school who talked to her, surprises her in her back yard: 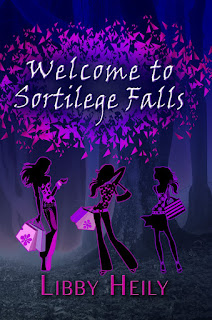 “Calm down,” the vamp kid from school said, his hands raised in the air like a victim. He had switched his purple shirt for a black one and slicked his curly hair back as well. “It’s cool. It’s just me,” he said and reached out to grab her shoulder.

Grape pushed him hard in the chest, making him stumble backward. “Don’t touch me. What are you doing here?”

He regained his balance and rubbed his chest where she’d shoved him. “I wanted to see where you lived. That really hurt.”

She slit her eyes at him. “I’m glad it hurt. It was supposed to.”

Grape grabbed the lawn chair and held it above her head. “Are you a stalker?”

“You’re sneaking around my house at night wearing all black.” She readied herself to swing the lawn chair. It was pretty light and wouldn’t do much damage so she decided to aim for a vulnerable spot—his face.

“Do I look nice now?” She gave the chair a swing, missing his nose by inches. She hopped back a little and held the chair up high again. He got one warning shot, that was it. The next swing would break his nose.

“I’m sorry. I thought this would be romantic.” He reached into his baggy pants pocket and pulled out an iPod with a little set of speakers attached. “I was going to play a song for you.”

He pressed play and an unholy mix of instruments blasted out in a tinny blare. He shut it off quickly. “Wrong song. One second.”

He looked up at her with heartbreak in his eyes. “I just need one second.”

“Shoo! Go! Off with you!” She shoved the chair at his chest, driving him backward.

He gave her one last dejected look and walked around the corner of the house toward the street.

Grape rushed back into the house, chair in hand. She locked the door. If Brad didn’t have his key, then he’d just have to knock and risk alerting their mother to his late-night shenanigans. She was not leaving the door unlocked for that boy to break in and serenade her.

Are you a book reviewer?  You can find Welcome to Sortilege Falls on Netgalley. 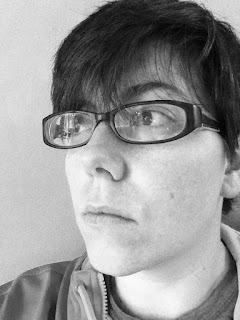 I was born during a blizzard. I’m told it was pretty cool but I have no memory of that time. I grew up in two tiny towns in Virginia and spent most of my twenties moving around the US. I’ve lived in Virginia, Florida, Missouri, and Washington. I’ve settled down, for now, in Raleigh, North Carolina.

I’m a writer and improviser. I studied acting in college but spent more time rewriting lines than memorizing them. My first play, Fourth Wall, was produced my junior year. Since then, I’ve written several full length plays, one acts, and screenplays. I started writing fiction in my late twenties. Now, I focus mainly on novels but still dabble in theater.

Fun facts about me: There are none. I’m sorry to disappoint you so soon. But, I do love to read, write, and run. My hubby is my favorite person on earth. Dogs are my second favorite. All dogs. I love orange juice, especially when it’s mixed with club soda. Carbonation is better than alcohol. Jaws is my favorite movie. Everything I’ve said so far is true.

Find Libby on the interwebs: