Update and a shout-out for friends.

Hey everyone! I'm a bit quiet at the moment, mainly because wrangling the monster that is my social networking process into some semblance of order is taking A LOT of time.

Right now, I'm busy with sorting out my Twitter. The one most of you follow (@MishaMFB). To say the least, I have been awfully silent on there lately for one simple reason.

Don't get me wrong. I'm all for promotion.

I'm just not all for promotion when it's spamming my Twitter feed so much that all the promotion take all of the "social" out of social networking.

Know that I love you to bits, but I don't love your twitter profile, so I'm just going to stop following it.

Because honestly, all the clamoring for attention and links instead of real interaction is driving me nuts. So much so that until now, I've actively been avoiding my twitter. And worse still, I only posted links there myself because I didn't want to trawl through my feed looking for people to talk to.

But no more. I'm trying to become the solution for myself by clearing out my feed.

It's taking long, though. I followed almost 3000 tweeps in my time on twitter and now I have to manually go through all of them to see who's only posting promos.

So that's where I was (and where I will probably be over the next couple of weeks.)

Yes, I know. Again. But the house I'm moving to will be super awesome and actually big enough for all of us. I can't wait.

But it does mean that I have limited time in which to get everything done, and since my twitter feed sort out is part of a larger reorientation of my social networking time, I have to get that done first.

Which means that I'll only really get around to full-steam blogging in July. The obvious exception being my bloghop post on Friday.

If you missed my whole post on what's making me reorganize, you can find it here.

Continuing my hunt for exposure, I've entered both The Heir's Choice and Endless into The Wattys, which is Wattpad's way of awarding good writing posted on the site. If a book wins, they put a bit more extra marketing effort into it, which is exactly the sort of thing I want at the moment. So if you're on Wattpad and you've been waiting for an excuse to read my books, please do check them out here.

Before I go, I just want to give a shout-out to some awesome blogging friends of mine... 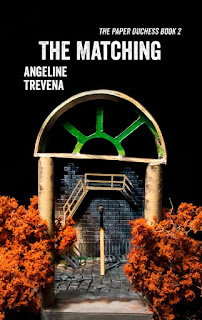 “There was a time when a girl’s wedding day was the happiest day of her life.”

In Falside, girls are a rare commodity; protected, controlled, and tracked by the administration. They spend their days idly waiting to be married off to the highest bidder.

When the marriage announcements include Tale’s lover, Freda, the women will do anything to stop the match from happening.

Their relationship is forbidden, and as members of the resistance, they’re already risking everything.


But as their attempts to stop the wedding fail, both women have to decide what they’re willing to sacrifice for love.

Angeline Trevena is a British dystopian horror author. She was born and bred in a rural corner of Devon, but now lives among the breweries and canals of central England.

In 2003 she graduated from Edge Hill University, Lancashire, with a BA Hons degree in Drama and Writing. During this time she decided that her future lay in writing words rather than performing them.

Some years ago Angeline worked at an antique auction house and religiously checked every wardrobe that came in to see if Narnia was in the back of it. She's still not given up looking for it.

Maysa Mazari is alarmed by her mother’s talk about arranged marriage. As a hijab-wearing Pakistani-American, she wants to find love on her own. Her judgmental Muslim clique has protected her from racist taunts, although the leader is turning on her as Maysa strays from the group because of her attraction to Haydee.

Haydee Gomez is a former gang member and juvenile detention student. Now living with a clean-cut aunt, she wants to turn her life around, even though one person will never let her forget her roots—Rafe, her abusive pimp. Haydee attempts to pull away from a life of prostitution when she develops feelings for Maysa, although Rafe isn’t willing to give her up too easily.

Finding themselves in danger from Maysa’s friends and Haydee’s pimp, it’s apparent their love disturbs everyone around them as they fight to stay together.

Find Medeia – YA and MG Author

Email ThisBlogThis!Share to TwitterShare to FacebookShare to Pinterest
Labels: Life, my blog, news