Hi all! Today I get to share some awesome samples of Power by Theresa M. Jones. There's also an awesome giveaway at the end of the post.

Before I start, though, I just have two reminders. One is for the Word Master Challenge. Entries close on Sunday, but no one's even entered yet. And it's an easy one, I think.

The other reminder: Please remember to vote for your favorite bloggers. You have until Thursday.

Right! Now without further ado. Let me introduce you to Theresa and her new release.

Theresa M Jones is just a regular small town, Texas girl. When she isn't at work at a local Medical Equipment provider,you can find her at home with her husband and two beautiful (and rambunctious) kiddos.

In her spare time- as if there ever was such a thing as "spare time" - she reads and reviews books on her book blog, and writes paranormal romance novels.

Thousands of years after the battle between the angels, when Lucifer was defeated by Michael in the Heavens, the war is still being fought on Earth by the humans who have their Power, the Angel’s Power.

Allison Stevens is a 21 year old single mother who gets thrown into the middle of this battle when Damien, the Leader of the Rising, decides to hunt her down and kill her because he fears she is the descendant prophesied to save the world.

David, a member of the Order, takes Allison under his wing in order to show her the ropes, and hopefully groom her into being the one they have been waiting for. The only problem is that they start to grow more attached than a teacher/student relationship should allow.

But that isn’t all. Damien wants to open the Seven Seals and bring about the apocalypse and it’s up to Allison to not only save herself and her family, but save the world, all while trying to keep her heart from breaking.

POWER is the first book in a New Adult (Mature YA) Paranormal Romance Trilogy and is the debut novel for author Theresa M Jones. 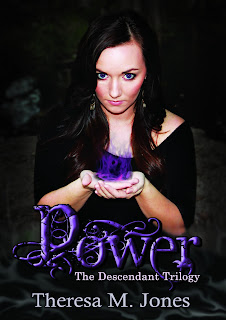 Part of Chapter One
I fell asleep before I had even covered myself up, just after my head touched the pillow. The dreams that had been haunting me so often left me miserable, exhausted, and craving rest.
My legs trembled as I tried to push myself to go faster. Despite the adrenaline that surged through me and the exertion from every cell of my being, I felt frozen. I shivered and yet was sweating at the same time. Waves of terror pulsed through my every limb.
Where was I going? Where could I go to get away from him? He knows where I am all the time, even though I have no clue as to my own whereabouts.
I slowed, just briefly, to try to catch a good long drag of air hoping it would fill up my lungs and give me strength to continue on. However, instead of the oxygen that I so desperately needed, I breathed in the rank air of pure evil. It was the same foul scent I smelled every time he was close. I could taste it on my tongue.
I could feel him closer now than ever before. Pure horror seeped in and I was running again. To where, I was still unsure.
Just as I could feel myself actually widening the distance between us for once, I slid to a stop. I had almost run into  a huge wall that blocked my path. It was not quite brick, but made of reddish gray stones that were symmetrical in every way. No cracks, no breaks, no holes. A perfect wall. Dark green moss was growing up the wall in many spots, making it slightly slippery and shiny looking. I stood there wondering how a wall like this was built, or rather how it came to be here, right here in front of me, blocking my only escape.
The small amount of moonlight that had been lighting my path suddenly disappeared leaving absolute blackness and the faint smell of damp. I turned. I felt for the wall behind me now as the slimy moss caressed my fingertips.  I heard him walking towards me. As if he realized there was no possible way for me to escape him now.
Then he stopped.
There was no sight now in this dreadful black, no taste, the wall was somehow no longer touching me, and if it weren’t for his atrocious smell, I might be able to think I had just ceased to exist. But it was the loss of sound that unnerved me the most. The only sound now was my breathing, the ragged gasping noise that cut through me with every breath and reminded me why I had been running in the first place.
That’s when it I felt it. I could feel it first around him, a concentrated evil that spread over the grass and through the air towards me. Like a match to a stream of gasoline, the feeling of hate and anger spread like wildfire. I felt it circling me, searing my skin and burning inside me at the same time. It took away my air. My lungs begged me for oxygen and my eyes burned as tears started to flood down my face.
When I had almost lost myself to the pain, something changed. He felt it the same instant I did. And instead of the hateful, anger-filled, death-like feeling that was surrounding me, I felt hope. It started right in the center of my chest and expanded out through my whole torso, like being dipped in a warm bath after being outside in the snow. It spread down to my toes and up to my head at the same time. A wave of pure hope, love, or… joy! I felt strong and courageous. No, powerful!
This new feeling of power poured through me and out through my fingertips, pushing away the dread and hate that had been eating at me, and straight across to the hateful man standing in front of me. I was surprised by the intensity. The force. The strength. I knew that he could feel it too, surging out of me and flowing freely wherever it felt the need to go.

Part of Chapter 15
I stepped outside into the fresh air. The sky was cloudless, and I could see all the stars. I walked to the pond and thought about putting my feet inside. It was summer, but we were high up in the mountains and the wind was chilly; so I decided against taking my shoes off and dipping my feet in the cold water. I snuggled my robe closer around me as I felt a small breeze. Being surrounded by massively tall cliffs, one would rarely feel a breeze out here, but when you did, boy was it cold. I sat leaning against a tree and looked out over the pond.
I didn’t hear him come up behind me, but I could sense him. I turned around as he greeted me the same as he always did, “Good morning, Allison.”
I chuckled, “I guess it is morning already.” He offered his hand and helped me stand. I took it eagerly, and went straight into his arms. He didn’t pull away. If anything, he held me closer.  It reminded me of the morning when I thought he would kiss me. After that morning he had distanced himself. But over the last few days he had gotten back to normal. He had even kissed my head and my cheek on a few occasions. Tonight I wanted more, though I was a little afraid to risk it. What if he started acting all weird again?
I breathed in deeply, allowing his scent to fill my nose and my lungs. He nestled his head into the crook of my neck and I could feel the scruff from his beard scratch my cheek as he started to breathe deeply as well. I could feel his breath tickle my neck and it sent shivers down my spine. It made me pull him closer still. I could feel his muscles touching mine, and I could feel the heat emanating from him, warming my skin through my clothes.
My heart started beating faster, and I felt my face flush with anticipation. He pulled away, just enough to look me in the eyes. I stared back into his, allowing him access to my soul, hoping he could see how desperately I needed him. I didn’t hold back at all.
Before I could even react his lips were on mine. The heat that I had felt when he kissed my cheek, was like a lit match compared to the forest fire I felt now. Every inch of my body was deliciously ignited.
This kiss started very slow. Tentative. Wary. Unsure.
But as my lips parted, allowing him full access to me, things changed. He deepened the kiss. His arms pulled me closer to him, wrapped around my back, and held me firm.
He tasted like heaven on earth. My arms were all over the place. On his face, on his neck, then down to his back. I couldn’t get enough of him. I couldn’t touch him enough, or smell him enough. Or… taste him enough.
This felt right. Like the ultimate goodness. My body tried to inch closer, but it appeared we couldn’t get any closer. His chest was warm and hard against mine, and fit perfectly, as if we were two pieces to a puzzle.

Who thinks this novel sounds amazing! Who's read it yet?

Also, who's in for the Word Master Challenge this month?

Posted by Misha Gerrick at 6:09 PM