We're rapidly heading for the end of October and I have a lot of ground to cover, thanks to a really ill-timed internet outage. So today, I would like to talk about conflict and stakes together. (Sorry if that makes my post run long.)

If you would like to check out the rest of the NaNo Need-to-Knows series, please click here. 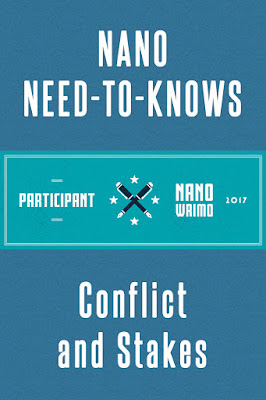 So why are the conflict and stakes of the story so important to me that I would focus on them for my final NaNoWriMo  preparation post?

If one is 100% certain of a story's outcome, what's the point of reading? This is why we get bored so quickly if there's just not enough challenges (i.e. conflict) standing between a character and their goal. The easier it is to achieve the goal, the less interesting it becomes, because the book also becomes more predictable.

But Misha, you might say, some books are predictable simply because they fall in a certain genre. Yes and no...

A book being a romance, for example, gives you about 99% of a chance that there will be a happy ending, but then the experience of reading is more about how that happy ending occurs despite everything that stands in the characters' way. If there's no conflict, the end just happens, and it's just not very satisfying to a reader.

So what is conflict? People have this nasty tendency to believe that conflict=fighting and bickering, and you can tell who those people are by seeing whose characters seem to fight all the time about things that could have been solved if they spoke to each other like normal human beings.

That's the thing. Conflict, in the sense used when creating a story, isn't about fighting. It's a counterweight to the story's goal. In other words, the antagonist and his minions is a source of conflict, but so is the main character's fear of water if they have to swim in order to achieve their goal. The former is called external conflict, in other words, a challenge that comes from outside the main character. Then there's also internal conflict, which comes from within the character, and usually takes the form of fear, anger, sadness, self-doubt, etc.

Ideally, you want conflict to come from both sources, because then it's not just a rote color-by-numbers walk-through until the character meets the big bad for a boss fight. Letting at least some of the conflict come from a character's heart and soul gives it all meaning. Which makes the reader care.

In other words, your story needs some stakes.

Broadly speaking, there are two ways you can do this. First, you can make the character's failure affect a lot of people. This is usually in the form of "everyone dies if the character doesn't succeed." Which is good, but not quite the most effective way to join the stakes with your readers' care towards a character.

No, for that, making the stakes personal is the best approach. It might sound silly, but something as relatively small as "If the character doesn't succeed, his best friend will die." often implies higher stakes (emotionally speaking) than "everyone dies." The main character doesn't know "everyone" and so the reader doesn't either. It's just a reason to care less.

So mix up your external and internal conflicts, and try to make even the high stakes you have feel personal, and you'll be well on your way towards creating a kick-ass story.

Do you plan your conflict and stakes ahead of starting to write, or do you make them up as you go along?

Before you go, I just wanted to also let you know that Spirits in the Water is making its way around the bloggosphere, and we're giving away some awesome prizes.

If you would like to see the blog tour stops, please click here.
Posted by Misha Gerrick at 3:24 PM