Continuing on my theme of plot-related need-to-knows for NaNoWriMo, I want to talk about the inciting incident today. What is it? And why is it so useful to know your story's inciting incident ahead of starting to write your NaNo Novel? 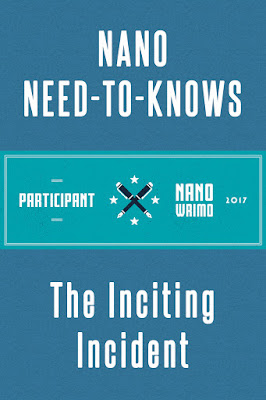 You know that line in book descriptions? "Everything changes when..."

And if the goal is your story's point, the inciting incident is then the catalyst that sparks off the story in earnest.

If you think about it from the reader's point of view, the story's goal doesn't exist until the inciting incident occurred. So the introduction has no direction; it's only an introduction. Direction only happens when the character says (directly or indirectly), "This is what I want to do." After that, the story is about whether or not that thing is achieved.

But it can't happen if there isn't some spark that makes the character set out on their journey in the first place.

That said, I tend to personally leave it up to the story I'm writing, for the inciting incident to happen when it's ready to happen.

So why the spiel about where to put it, then?

Because a surprising amount of writers feel like their story is dragging half-way into the book and they can't tell why.

Often, the reason is that they've written half a novel's worth of words, but nothing's happened yet. So it's basically a half a novel of waffling around with no direction and no visible point. Because nothing happened to make the character decide to do something. And as such, nothing is done.

If you know what the inciting incident is supposed to be, you'll also know if it hasn't happened yet, and so you can make sure it does happen and soon enough to keep your story from lagging.