As part of my NaNo Need-to-Knows series, I'm sharing advice on the things you need in order to get through NaNoWriMo. (Click here for a list of links for the ongoing series.) 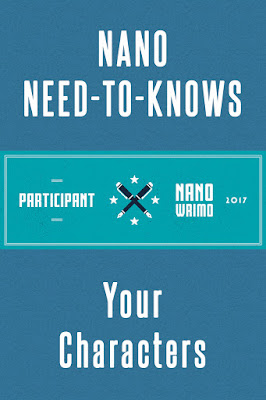 For the rest of October, the blog part of this series will deal with some writing technique things you need to know in order to create a strong NaNoWriMo Novel.

Since I'm more of a character-driven writer, I'm starting with characterization, but you can sort out the plot-related aspects first, if that's what you want. (I'll be starting with those on Monday.)

But what does one have to figure out with regards to characterization? And why is it important?

Who Is Your Main Character?

Yes, the way a character looks can be important for description purposes, but when it comes to creating a strong story, you need to go deeper than the superficial.

Because knowing your character means you know what your character will do in a given situation, which in turn can help you drive the plot forward as you write.

Is your character prone to keeping grudges? Then having something happen to make them want to avenge themselves will be a great way to set a strong story goal. AND your character will want to go after that goal.

Want means there are now personal stakes to achieving the goal, which is one of the best ways to maintain tension in a story.

So make sure you get to know your character before you start, or that you create enough opportunities in your writing during NaNoWriMo to explore your characterization.

Some ways to do this exploration before NaNoWriMo:

What Motivates Your Characters?

And if you can get to the heart of any situation with a character, you can use that to strengthen the impact of what's going on. You'll also instantly know when a scene doesn't make sense, if it goes against the character's motivation.

For example. You have a character (let's call her Sally), who gives a bitchy response to a snarky comment from another character (Dan).

Sally could theoretically have hundreds of choices about how she's going to respond to Dan's sass, and she goes for being nasty. Why? Why didn't she walk away instead? Or play sweet?

Because she sees every sassy comment as an attack on her person and feels the need to retaliate. Why?

Because she feels like the whole world is out to get her and she needs to fight to survive. Why?

Because she's seen the hard side of the world and has been in survival mode her entire life.

Characters wanting things are nice. But I frequently want to eat a chocolate. What do they need? What is the thing they would do anything to get because that need comes from the depths of their souls? Those are the truly important things, and if Sally needs something to happen, and Dan equally needs that same thing not to occur, you have instant fireworks. So take the time to learn your characters' motivations, and then figure out if you can put them in opposition to each other.

It just livens up every scene containing those characters, because now every moment between them matters.

Next week, I'll be talking about story goals and inciting incidents, and why they're important. And on my vlog on Friday, I'll be sharing tips on how to choose between story ideas for NaNo. If you're a Patreon patron for as little as $1 a month, you'll be able to watch my vlog post on Thursday instead.
Posted by Misha Gerrick at 3:17 PM