Hey everyone. Not really in a head space where I can blog at the moment, but I wanted to stop by and give a shout-out to Alexia Chamberlynn, who has a new book out. 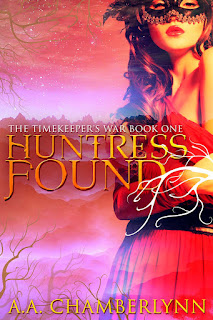 Evryn’s got mad skills at playing hide and seek. She can find lost children, hack the most secure databases, pretty much anything. Except for the one thing she desires most: the knowledge of who her parents are, why they abandoned her, and what her special talent means about who and what she really is.

So, when a guy named Seeker appears quite literally out of nowhere, claiming to know about her past and offering her a job, Evryn can’t say yes fast enough. Even if it does mean following him to another realm. As in, mind-blowingly, not Earth. Apparently she’s part of an elite clan of Hunters descending from Artemis who can find just about anything in all of time and space. As the last of Artemis’ direct lineage, Evryn is her clan’s best shot at finding a lost city before rival clans do.

Not just any city, but the flying, realm-hopping city of Skye. Aboard Skye is the Artifex, a magical device with the power to create or destroy worlds. Everyone wants the device, and with Evryn’s super-powered lineage, it means everyone wants her, too. It’s hard to decide who she can trust, even within her own clan. After she discovers a strange, alluring connection to the Artifex, she’s not even sure she can trust herself. Worse yet, the only person who may be able to help her is the Timekeeper, the sadistic ancient being who created the Artifex. An interdimensional war is brewing, and Evryn is right at the epicenter of it all.