Four Tools for Revising Your First Chapter by Crystal Collier

In 1771, Alexia had everything: the man of her dreams, reconciliation with her father, even a child on the way. But she was never meant to stay. It broke her heart, but Alexia heeded destiny and traveled five hundred years back to stop the Soulless from becoming.

In the thirteenth century, the Holy Roman Church has ordered the Knights Templar to exterminate the Passionate, her bloodline. As Alexia fights this new threat—along with an unfathomable evil and her own heart—the Soulless genesis nears. But none of her hard-won battles may matter if she dies in childbirth before completing her mission.

Can Alexia escape her own clock?

4 Tools for Revising Your First Chapter

Thank you Misha for having me here today!

We all struggle with beginnings. Let's face it. You've got an epic story, but that first sentence is the toughest to get on the page.

That's right jump over that first sentence and just write. 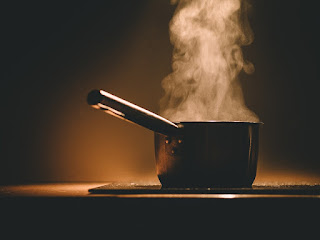 What?!? Here's the deal. It's almost guaranteed you will come back and restructure your beginning. Hovering over the first sentence is like worrying what flavor of icing you want before deciding the flavor of the cake.

When you come back to revise, start as late into the story as possible. No traveling to the place where the story starts. No sitting and pondering the upcoming trouble. As a writer, it's your responsibility to drop us into a boiling vat, right from the get go. (Meaning trouble--not necessarily climactic action.) What inciting incident sets the characters on a journey? Start us there.

So if you're at the point where you're ready to revise and make your beginning kick trash, where do you start? Good editing is about asking good questions. Here are some aspects you should question about your beginning:

(Disclaimer: I will be using examples from my books, not because I hold myself as an authority, but because this is a blog tour for my new release. Now BUY MY BOOKS. *winks*)

The first sentence: We appropriately put weight on this one line, but it doesn't have to be a mind-blowing literary masterpiece. What it does need to accomplish is AT LEAST two of these things:

Example: (MOONLESS) Alexia was reasonably confident that exiting the carriage was the equivalent of stepping into Hell. (Character, mood, setting, and problem.)

The first paragraph: By the end of this paragraph (or two), your reader MUST be asking a question. If you've done your job right, the reader will be immersed in drama, care about your character, and be anxious for the next line.

The reader might wonder, "Why does she think she's going to die?"

The first page: By the end of the first 250 words, the reader needs to be grounded with the basics:
If using an "all's-well" opening (where we KNOW life is good and it's going to be disrupted), there had better be a hint of trouble either foreshadowed or mentioned.

The first chapter: At this point, we all hope to have a bear trap clamped around the readers ankle. To do this, we need 1. a character they want to root for, or 2. a problem they need to solve, or 3. a metaphorical rug that got ripped out from under their feet. (Preferably, all three.)

1. This making us like the character, how does that work? Blake Snyder calls this the "save the cat" moment. The character has been placed in a circumstance where they have to show their inner convictions. In the first chapter of Soulless, Bellezza shows up to murder Alexia. Yay. Not only does Alexia escape her murderess by using her ability to freeze time, but faces Bellezza to interrogate her. (All while suffering through a blinding migraine caused by using her gift.) We see that she is angry and injured, but a person who confronts her fears rather than running away. There's something to root for.

2. A problem that needs solving. We are all creatures of comfort. If there's a problem, it creates discomfort in the reader's mind, and a need for resolution. In the first chapter of TIMELESS, Alexia is battling the Knights Templar...eight months pregnant. (Yup. There's the problem.) They have hunted her and her companions from one place to another...all while facing the inevitable deadline of birth. Which could happen on the battlefield. Get to solving, Alexia!

3. The rug ripped out from under your feet. This is that moment, that last line or thought that makes you go, "Brrr?" The first chapter of Moonless ends with a mystery. A man straight out of Alexia's nightmares has appeared at a social gathering--the man she saw in her most recent dream standing over her dead host. Who here has met someone face to face who first appeared in their dreams?

In the end, formulating the perfect beginning is just about hooking your readers. Do that, and you've got it made.

What is your favorite/least favorite story convention for hooking readers?

Crystal Collier is an eclectic author who pens clean fantasy/sci-fi, historical, and romance stories with the occasional touch of humor, horror, or inspiration. She practices her brother-induced ninja skills while teaching children or madly typing about fantastic and impossible creatures. She has lived from coast to coast and now calls Florida home with her creative husband, four littles, and “friend” (a.k.a. the zombie locked in her closet). Secretly, she dreams of world domination and a bottomless supply of cheese.

Find her and her books online HERE.