Today is the last Friday of the month, so it's time for another Update Day for the Got Goals? Bloghop, where a few of us writerly bloggers share updates on our (lack of) progress towards our big and very important goals. If you're curious or want to join in, click here.

September was a hectic month for me. The first few days was filled with panic and anxiety. The few weeks after that were filled with good times because one of my oldest writing buddies came all the way from Seattle to visit. At the same time, I had a major work function, major work deadlines, and... just general chaos around moving house. And I haven't even physically moved house yet. Long story.

In short, most of my goals for this month fell by the way-side. But on the positive side, I had another record earning month despite all the chaos and I missed one of my major stepping stone goals by a relatively tiny amount. I was a bit peeved when I realized how close I got. But then I had a bit of a think and realized: Bloody hell. Two years ago, I started with starry eyes and an impossible goal. People told me not to even try this full-time writer thing. But here I am.

Was it fun all the time? Hell no.

Yet, despite all the challenges and the impossibility of what I was doing, I managed to build a thing. So yeah, a lot of other things took a knock so I could get here. This includes my writing and blogging, etc. But once we're settled in our new house, I'll be in a better place to actually write my own stuff than I've been in five years.

I'm going to celebrate this month. And uh... move. Wish me luck.

How did your September go? Anything you're celebrating?

While we're on the subject of celebrating, an anthology I'm part of is now available for preorder. 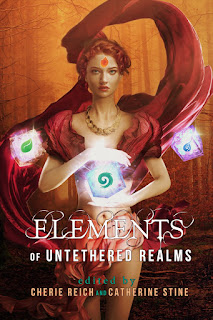 Enter our mysterious realms where the stories are as varied and rich as the types of soil on this and other planets. Enchanted forests are knotted with roots and vines. Dreaded paths take us through strange, unexplored places.

Investigate new worlds and houses frequented by ghosts. Come across witches and wizards and an assassin tasked to kill Death.

Meet hot robots, hungry winds, and the goddess of chaos. Explore alien lands, purgatorial realms, and a shocking place where people bury the living with their dead.

Experience a haunted journey on a riverboat, water sprites borne of pennies, preternatural creatures, ancient serpents, and the Lady of the Lake who lurks in dark waters.