Eef Lenaerts on Writing a Book About Traveling through Africa

One of my first freelance jobs was to do the editing, formatting, and cover design for a book about traveling through Africa from Egypt to South Africa. It was a great book for me to read, because the idea of traveling over Africa has always intrigued me. (Although I'd do it in reverse from how the writers Eef and Dries did it, seeing as I am in South Africa already.)

But because I enjoyed working on the book so much, I thought I'd invite Eef to do a guest post about what it was like for her to write it. 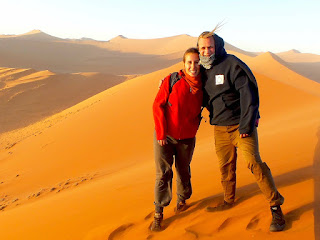 Like many of you here, we wrote a book! But we’re no writers, we’re travelers and we had absolutely had no idea how the hell to write a book, so we got some help from Misha.

The book is finally finished (thanks to Misha) and she asked us to write a guest post about the process of writing a book while traveling, so here we go!

Four years ago, we left Belgium with our car. Two years later, we reached South Africa. It was an adventure, with many ups and downs. We loved it, but at times we hated it. It was hot, it was cold, it was amazing, it was dreadful…but it was the adventure of a lifetime that no-one can take away from us.

We left as total dummies with our Toyota Landcruiser. We drove from Belgium to Turkey and took a ferry to Egypt to start our way down along the East Coast of Africa, with South Africa as our end goal.

We were total dummies. Young and eager to go, we couldn’t wait. We packed up our house, sold our belongings, and bought a 4x4 to go on the adventure of a lifetime!

We didn’t take enough preparations, so of course we ran in problems along the way, getting stuck in the dessert with a hi-lift jack, but no points to use the jack, having a spare battery for the fridge, but having a warm fridge, applying for a visa, but no USD to pay for it…

These were all small things that we could sort out, and they make some great stories now, but we could easily have avoided these issues. So after the umpteenth time of thinking “Oh really? Wish we knew this before!’ I decided to write a book for the other dummies in the world!

With a good mood, I started writing down things that were important to prepare before you leave home, ways to act in certain countries, hidden treasures along the road, etc. Gathering this information was easy, but making it into a book was way more difficult than I thought.

It took me two years to finish the book. One reason was because we were still traveling, so we had a lot going on. The other reason was simply that things change constantly in Africa! So the information about a border crossing from two years ago was absolutely out of date. This meant that apart from the actual writing, the book required A LOT of research. In the end, I had read the content so many times, I just couldn’t cope anymore.

So for me, it was a horrible experience. :P

I don’t think I’ll do it again in the near future, but the book is finished and I’m very proud of it!

So if you’re interested to have a look at what I made of it, or just need the final push to start an adventure (the big aim of this book is to give the people that push they need to get out the house and go and see the world), feel free to look it up! Part of this book’s profits will also go to the Rhino Fund Uganda, so the rhinos will thank you. 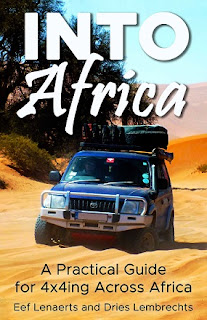 Two years ago, Dries and Eef decided to throw caution to the wind. They packed up their house, sold their belongings and bought a 4x4 to go on the adventure of a lifetime, traveling over the African continent. It was a life-changing experience, filled with amazing sights and wonderful people, but it was also challenging because when they started, they had no idea about what they were letting themselves in for.

So to help others who want to share in this amazing adventure, Eef and Dries decided to share their experiences and advice learned the hard way, just to make things a little easier for new adventurers.

Which means that Into Africa is a fun read for armchair travelers, but especially useful as a guide for adventurers out to experience Africa for themselves.

A portion of proceeds from the sales of this book will go toward The Rhino Fund Uganda, an organization focused on saving rhinos from extinction.

Anyone else ever dream of traveling through Africa?
Posted by Misha Gerrick at 12:27 PM