Social Contracts, The Prestige, and the Subtle Art of Mind-F*ckery 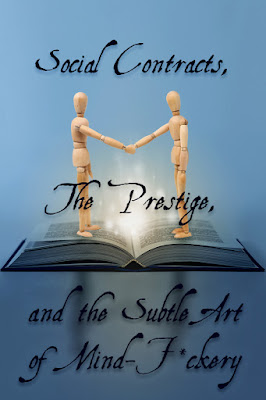 As I mentioned on Wednesday, I recently read a book that had some... let's call them issues. I'm not going to name names, but you guys will probably be able to track it down if you follow my social networks, or if you're patient enough. But if you do track the title down, keep in mind my comments can be seen as spoilers once you have the context, so choose wisely if you want to find out what book I'm talking about.

At any rate, I mostly did enjoy this book. It had an interesting voice and rapid pacing that did serve to keep me immersed in the reading.

But will I be reading this book's sequel, which is coming out soon?

I could blame some of the plot issues this book had, but if those were the only ones, the book had entertained me enough to encourage me to (eventually, maybe) pick up the sequel. But no. The issue was a bit more serious.

The issue is that the writer broke her social contract with me.


Some writers seem to be completely unaware of the fact, but all works of fiction come with a reciprocal, unwritten social contract.

The reader agrees to suspend disbelief until the end of the book, trusting the writer's ability to tell a good story until the very end.

On the writer's side, there's the promise of a good story being told, and that any leap of faith taken by the reader will be either explained or rewarded in some way by the end.

I always talk about the plot and characterization in a book being its foundation. Well, taking this analogy further, this social contract of trust and reward basically stands as the reason why the foundation had been laid in the first place. The writer wants to entertain, and the reader wants to be entertained. The social contract makes it possible for both sides to both get and deliver what is needed for this transaction to occur.

My problem with this book is that I spent 90% of the book trusting the writer despite some logic issues in the story, only to be rewarded at the end with "Oh well, the conflicts, the stakes, the choices, and even the supposedly devastating sacrifices as the result of those choices never actually mattered and were all undone by the end."

While it had been foreshadowed from the start that this was the case, but nothing had prepared me for how little it all mattered in the end.

And so, at the end of it, I, being a reader, felt betrayed. So much so that I'm simply not willing to get back onto that roller-coaster again for the sequel.

So How Do Writers Deliver Their End of the Contract?

The main step, of course, is to tell a good story, which revolves around all the techniques you guys already know.

But if you were to want to write a book that is designed to completely screw with your reader's minds, it basically comes down to one thing:

Don't put the mind-f*ck ahead of the story.

In other words, if you're putting so much effort into blowing the mind of the reader at every turn, you're actually harming the story, either by making it predictable, or by unraveling all the meaning you'd put into it.

This is such a difficult thing to explain without naming examples, so I will name two examples in movies. And to make the point I'm making clearer, I'll even make the main characters have the same vocation.

I present to you: 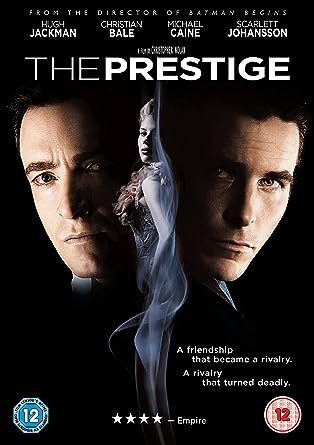 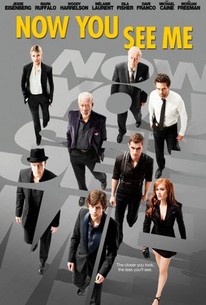 Before we continue: SPOILER WARNING!!!

Of the two, I think the book I'd read was trying to be The Prestige. And why wouldn't it?

In The Prestige, the pacing was tight. The conflict was no-holds-barred and take-no-prisoners. The stakes kept climbing. But here's the thing. The conflict centered around what two stage magicians were capable of doing to each other in the name of revenge. The mind-f*cks started coming when the understanding the viewer had of the events in the story took on a new meaning, once they realized what the magicians were willing to do to themselves in order to win in this revenge game. (Let me just say that those things are more horrific the more you think about them.)

Everything in The Prestige is established, shown, and explained, peeling back layer after layer until the viewer is given clear sight of what they had been seeing all along. In other words, nothing was hidden, save for the meaning of what they had seen, and even that is revealed by the end as the huge twist. If viewers rewatch the movie, they will have a different experience, just because they understand all that's going on in context. But even knowing the context and twist, The Prestige is still a movie worth watching, simply because the characterization was excellent and the plot in itself is amazing. (Brilliant conflict. Huge and ever-increasing stakes driven by character motivation.)

What the book ended up being was Now You See Me. This movie sets up a conflict, only to reveal it's a diversion, then sets up another thing, only to show it's fake. And another, and another, none of which is real. By the third time there's a plot twist (and I use the term loosely), the viewer's mind isn't blown, because the viewer knows that literally nothing that's happening is actually happening. So stakes? Nada. Conflict? Meh what conflict? We don't even know what the goal is yet. (If we don't know what the goal is, we don't know what is standing against the goal.)

Plot twists are thrown in with little to no real ground work, all to "generate interest." And in the end, it is revealed that the one thing the viewer thought was real—in other words, the heist and the conflict with the detective—was all fake and that the whole time, there had been an entire other plot that the viewer had not been allowed to see on purpose, and that gets jumped on the viewer from left field with little more than a "ta-da!" in the third act.

This in a nutshell was exactly what had happened in the book. Literally in the third act, we're not only introduced to this whole other unseen plot, but said plot literally undoes everything in the book, including the relationship between the two leads that had been developed as the story progressed.

So what happens is that once this other plot becomes known, the plot we readers had read—the one we had known and spent time on—doesn't gain a new meaning. It gains non-meaning. As in, if I reread this book again, I'll never be able to commit to the story again, because this story literally means nothing now. Nothing I had been shown in the story actually meant anything. The story is defined by what I hadn't been shown, and in short, by how much the writer had taken my trust without giving me anything of substance in return.

And instead of being mind-blown, I'm just really upset and let down.

So if you are working on a book that hinges on some major plot twists, please do ask yourself:

If my readers reread this book knowing the plot twists in it, will they still be presented with a compelling plot?

Or will everything I set up fall apart because of the way I resolved the story?

If you answer yes to the latter, you failed to hold up your part of the social contract. It really is that simple. Now if you'll excuse me, I think I'll go rewatch The Prestige.

Anyone else love The Prestige as much as I do? Anyone else feel as betrayed as I do when plot twists basically undo entire stories?
Posted by Misha Gerrick at 11:29 PM