Hey everyone! Today I'm taking part in the I Survived Blogfest in honor of Chrys Fey's newest book. 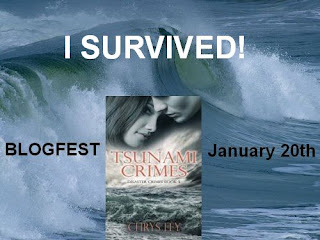 This is Chrys Fey reporting for Disaster 5 News. I am in Cape Town, South Africa where a tsunami hit yesterday morning. I have Misha with me, a survivor of the tsunami. Misha, can you tell our viewers what happened, and how you survived?

[Wiping away tears, clinging to the emergency blanket around her shoulders.]

It was terrible. Just... Just water everywhere. One moment I was shopping for groceries-- [Sniffles, chin wobbling as she wipes away tears with the heel of her hand]

I'd just come out of the shop and talking to my mom on the phone when I heard screams. It just didn't make sense. [Clears throat, tears welling in her eyes.] People shouldn't scream on Fridays. I looked in the screams' direction and there was just this...this roar and-- [Breaths shallowing as she tries not to break down] Water. Water everywhere.

It pushed me back before it even hit me, and when it did, I knew I was going to die. [Breaks down crying, shoulders shaking with the force of her sobs.]

[Manages to look up again. Speaking through tears] I woke up on the roof of a bus stop. The wave must have put me there. I... I can't believe... I don't know how I survived.

The street below me was empty of people.

BLURB: Beth and Donovan have come a long way from Hurricane Sabrina and the San Francisco earthquake. Now they are approaching their wedding day and anxiously waiting to promise each other a lifetime of love. The journey down the aisle isn’t smooth, though, as they receive threats from the followers of the notorious criminal, Jackson Storm. They think they’ll be safe in Hawaii, but distance can’t stop these killers. Not even a tsunami can.

This monstrous wave is the most devastating disaster Beth has ever faced. It leaves her beaten, frightened. Is she a widow on her honeymoon? As she struggles to hold herself together and find Donovan, she’s kidnapped by Jackson's men.

Fearing her dead, Donovan searches the rubble and shelters with no luck. The thought of her being swept out to sea is almost too much for him to bear, but the reality is much worse. She’s being used as bait to get him to fall into a deadly trap.

If they live through this disaster, they may never be the same again.

Posted by Misha Gerrick at 8:20 PM