Hey everyone! Today, I'm welcoming William Michael Davidson to the Five Year Project as part of his blog tour.

William Michael Davidson lives in Long Beach, California with his wife and two daughters. A believer that "good living produces good writing," Davidson writes early in the morning so he can get outside, exercise, spend time with people, and experience as much as possible.

A writer of speculative fiction, he enjoys stories that deal with humanity's inherent need for redemption.

For more on Davidson and his writing, connect with him on Goodreads, Twitter, Facebook, and Amazon Author’s Page.

Welcome to the Five Year Project, William. Since I'm all about goals on this blog, I was wondering about five-year goal. Tell me about it?

My five year-goal is fairly simple.  Assuming The Remnant does well, I would like to finish the trilogy.  I have finished the first draft of the next novel, Mass Exodus, which is the sequel to The Remnant.  It’s going to take me several months to edit it and clean it up.  I would also like to write the third book in the trilogy.  In addition to finishing this series, I would like to publish another novel I recently finished, Storm Taken, and write an additional novel I have an idea for that is a bit larger (maybe 120,000 words or so).  So all in all, lots of writing and publishing in the next five years. 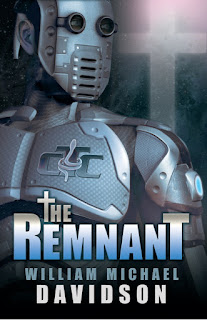 Colton Pierce apprehends Abberants—those who display symptoms of faith—and quarantines them on a remote island to ensure public safety.  Years prior, the government released a genetically-engineered super flu that destroyed the genes believed to be the biological source of spiritual experience in an effort to rid the world of terrorism. As an extractor with the Center for Theological Control, Colton is dedicated to the cause.

But Colton's steadfast commitment is challenged when he learns his own son has been targeted for extraction. An underground militia, the Remnant, agrees to help Colton save his son in exchange for his assistance with their plan to free the Aberrants on the island.

Colton is faced with the most important decision of his life. Remain faithful to the CTC? Or give up everything to save his son?

THE REMNANT is available to order in eBook form at the following sites:

The print format of the book is available at these sites:

Thanks for stopping by, William! What do you guys think of the cover? Cool, isn't it?
Posted by Misha Gerrick at 1:26 PM