Before and After: The Vanished Knight Cover

Hey everyone! Since a lot of you guys were really interested in seeing more of these before and after posts, I thought I'd do a few more of them.

Today, I thought I'd share what went into one of my covers.

How? Well... Photoshop has a month-long free trial and Flickr makes it possible for me to find images with a creative commons license.

The image I picked was Albion_Sovereign_Medieval_Sword_11 by Søren Niedziella. The license has a CC BY 2.0 license attached, which means that it's free to adapt and to put to commercial use, as long as I give proper credit and don't imply that the licensor endorses my work in any way. (New kids in the image copyright game: This paragraph can be very important if you want to make a cover from a free image.) 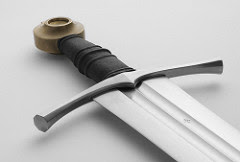 This was literally the first time I tried to make a cover, so I kept the image manipulation to things I knew: changing exposure, the composure of an image and cropping.

By composure, I mean, placing the image so that the viewer's eye gets drawn in. First was the placement of the sword itself and next came the titles.

I also had the added issue of the maker's mark on the blade. Little things like that can really make a viewer's eye go to the wrong place. Luckily, though, the best placement of the blade was in a way that happened to put the mark out of the frame. 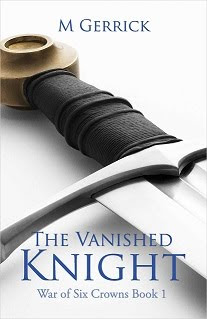 Pretty good, don't you think? Oh, but that's nothing compared to the new cover I'm about to put on the books.

Yep. I already have the e-book covers done. Only need to do the paper-back covers before I update both The Vanished Knight and The Heir's Choice.

Who knows, maybe one day, the books with the old covers on them will be collectors' items. ;-)

If you'd like to check out The Vanished Knight, you can find it at the following e-tailers:

The paperback is also available at places like Walmart's e-store, Book Depository etc.

And there you have it? Let me know your thoughts. Also, would you guys like a crash-course on image copyrights as learnt by me? Looking forward to more before and after posts?

Email ThisBlogThis!Share to TwitterShare to FacebookShare to Pinterest
Labels: before and after, cover design, graphic design, The Vanished Knight