Hey all! Welcome to another Monday Feature. Today, Mark Murata is visiting to show us how he uses Excel in writing.

If anyone else wants to sign up for a guest post feature, please click here for more information.
And now, let's see what Mark has to say.

Get the pun in this entry’s title? For the first time, I’m using an Excel workbook as part of my writing. In my mashup of The War of the Worlds, I have the cylinders from Mars landing near different cities around the world, not just London, so their invasion has to advance consistently on each day.

I also have three groups of characters in three locations. Their actions have to be coordinated, so I need to track who is doing what on each day. 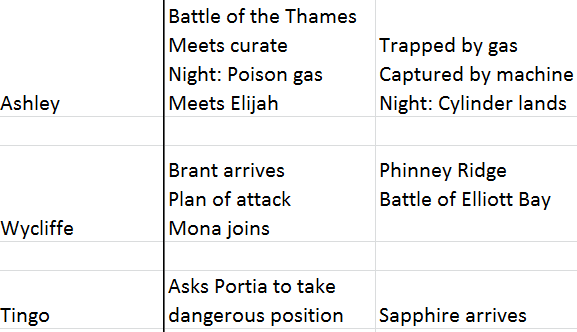 I’ll also have to track the positions of Mars and Venus, as well as phases of the moon. J.R.R. Tolkien once remarked something to the effect that he could not have Aragorn look up one night and see a full moon, then have Gimli look up a couple nights later and also see a full moon. He kept charts on phases of the moon, and also the speed of Gandalf’s horse Shadowfax.

Learn from the greatest.

Anyone else use Excel when you're writing?
Posted by Misha Gerrick at 1:30 PM