Hey everyone! Today you won't be able to find me on the bloggosphere, but I wanted to stop by to welcome the Insecure Writer's Support Group.

Also, thanks to everyone who've commented on yesterday's post. You're all awesome.

Have you ever engaged in a thought experiment?

Albert Einstein’s famous Theory of Special Relativity came to be in part because of a thought experiment he conducted when he was a young man.  He imagined what it would be like to chase a light beam.  That act of imagination was the beginning of a revolution in the way we understand our universe.  Imagination is one of the most powerful tools we have at our disposal.

The ten authors featured in the Insecure Writer’s Support Group anthology Parallels: Felix Was Here engaged in a thought experiment of sorts when they sat down to write their submissions.  The task was to write a speculative fiction story that uses an alternate timeline or parallel universe.  That means asking some interesting questions.  If you’re dealing with parallel universes, how does the parallel universe differ from our own?  If you’re dealing with alternate history, what historical event happened differently, and how did the world develop because of that change?

Any writer must harness the power of their imagination when writing their stories.  Though the thought experiments that helped make this anthology possible won’t revolutionize the world of science like Albert Einstein’s thought experiment did, these stories will hopefully entertain readers and make them think about how the world could be different.  That is also a valuable outcome, and one that most writers hope to inspire.

Imagination can change lives.  It can change the world.  If you’re interested in entertaining new possibilities, Parallels: Felix Was Here may have something to offer you. 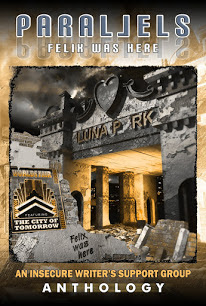 Enter the realm of parallel universes!

What if the government tried to create the perfect utopia? Could a society linked to a supercomputer survive on its own? Do our reflections control secret lives on the other side of the mirror? Can one moment split a person’s world forever?

Hand-picked by a panel of agents and authors, these ten tales will expand your imagination and twist the tropes of science fiction. Step through the portal and enter another dimension!

Anyone else engage in thought experiments? What stories did they inspire?
Posted by Misha Gerrick at 12:00 PM