Keep Calm and Chill Out: 4 Reasons Why Pushing Through Exhaustion Is a Bad Idea 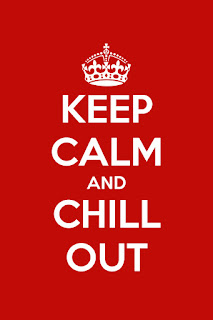 My vlog post from last week has gotten me thinking a lot about why I almost always have to get to the point of burning out before I feel “okay” with taking a break.

In a lot of ways, I think it comes down to this whole mentality of Keep Calm and Carry On.

Don’t get me wrong. Yes, carrying on despite adversity is often the best thing we can do. But sometimes, I think we’re carrying on a little bit too far. And this is why:


1) Forcing ourselves to keep going despite exhaustion only exhausts us more.

And yet, we ignore this common sense all the time.

What’s more, people expect it from us. They even praise use for doing it. Think I’m crazy? Take a look around at people who are positively bragging about the fact that they’re living off of coffee and pulling all-nighter after all-nighter. And then see the comments. Only a few “buzzkills” will think to say, “Five nights in a row already? This is really bad for you. Please go get some sleep.”

And sometimes, that’s fine. We often do need to push through exhaustion, because we quite simply are exhausted all the time. So if we don’t push ourselves, we wouldn’t get anywhere.

But as with my five-all-nighters-in-a-row example, there are limits, and we’re all but ignoring them all the time.

2) There’s so much more to exhaustion than being tired.


So let me tell you a little story. I committed to writing because it was my lifeline after I had proverbially drowned myself in a study course I’d hated.

I knew in the first week of my studies (in 2007) that I wasn’t enjoying the course, but the Keep Calm and Carry On thing struck again. And I carried on. And on. Often giving up my sleep—all-nighters for the win, right? The faculty acted as if this wasn’t only normal, but to be expected as a prerequisite for success.

Half way through 2008, I seriously considered throwing myself in front of a car to be a valid alternative to going to class.

It wasn’t even that I was suicidal. I don’t think. But I was exhausted. Mentally. Physically. Emotionally. And by ignoring my exhaustion for about 18 months, I had lost the capacity for normal emotions about a class. I had lost most of the capacity to think straight. I say “most,” because in the moment I was about to take that step, something in my mind went “WTF ARE YOU DOING?????!!!!!!!” and I had a moment of clarity.

I crossed the street and skipped class. Instead I went to administration and changed my degree.

But here’s the thing. The damage was done.


So I had taken myself out of the nightmare degree and made sure to get more sleep. Did that make me feel better?

No more than quitting smoking after being diagnosed cures lung cancer.

My mom not-so-secretly thought I was taking drugs because, simply put, I was broken more than a year after leaving that degree.

I literally can’t remember the second semester of my second year (2008). I know I passed most of my subjects, but the one I failed... It’s like a hole in my brain. I can’t even remember sitting for the exam.

I had issues at fencing practice in 2009. Why? Because parrying and self-defense is important if you want to win. And my self-preservation instincts had been all but destroyed. I could literally see the hits coming in, but my brain just wouldn’t react defensively.

My short term memory was blown.

And worse, I, a trivia queen, couldn’t recall whole chunks of the knowledge I’ve gathered over my entire life.

In the end, the only thing that stopped me from being clinically diagnosed with depression in 2010 (I think. Kinda hazy on the date there.) was the fact that I had 3D awareness in the psychologist’s test.

Everything else was blown to hell, as a direct result of my exhaustion.

I knew something was wrong, but didn’t realize how bad it was until the psychologist gave me a four digit phrase that I couldn’t repeat back five seconds after I’d heard it.

As in a whole five years after I had quit exhausting myself. 18 months of damage, five years of recovery.


Yeah, I know quite a few of you might be thinking Oh this would never be as bad for me. I’m in total control.

The thing is, pushing yourself through exhaustion isn’t a once-off. It’s cumulative. You know the analogy of boiling frogs, right?

Toss a frog into boiling water and it jumps out. Put it in cold water and then put it to boil.

It’s the same thing with exhaustion. Every time we push through, we’re tiring ourselves out just a little bit more.

And you might be thinking Huh. This isn’t that bad. But that’s just you acclimating yourself to your new normal of exhaustion.

If there isn’t a finite, certain end to the causes of your exhaustion, your new normal might end up being the complete destruction of your health and mind.

So when it’s looking like the crap that’s exhausting you just isn’t ending, the logical reaction isn’t to carry on.

It’s to pace yourself. To take a step back and pare back to the absolute minimum so that you can get to the end with most of yourself intact. Life is hard enough as a marathon, without you doing repeated 100m sprints as you go.

What about you? Do you have a tendency to push yourself too far? How do you deal with exhaustion?

Posted by Misha Gerrick at 7:10 PM