Hi everyone! So, my plans to resume my regular posting schedule from Monday didn't work out quite as planned, and today I'm just too exhausted to put any major thought into what I'd like to write here for today.

See last night, someone on Wattpad accused me of stealing her cover (which was as a result of Wattpad wrongfully putting her cover on my book on her app). The mind boggles as to how that could happen, but it's far from the biggest thing about last night to boggle my mind. But, let's not delve into the unpleasantness except to say that it took me until 2:30 this morning to clear up, which means I'm currently running on about four hours worth of proper sleep.

Yes, it is indeed impressive that I am this coherent still at 5pm the next day with only one cup of instant coffee to sustain me. That said, I'm not pushing it, which is why I'm ever so grateful that J Lenni Dorner tweeted me this: 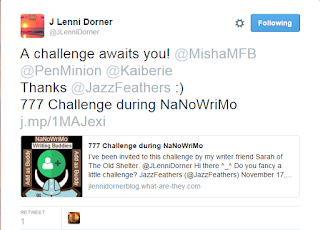 That's right, the 777 Challenge is back, and since I'm working on multiple projects that are all different from the last time I took part, I'd thought this is perfect for today.

To recap, the rules are as follows:

Since it's the easiest for me to do, let me see what's on page seven of Book 3 in The War of Six Crowns. Bewarned, though. This is only moderately better than a rough draft, since I don't edit until drafts are done...

Callan sighed. Surely this was relatively well-known. Maybe the news just hasn't reached earth yet.
"The wedding was supposed to be part of an alliance," she said.
"We know," Claire said, putting her a bit more at ease.
Gawain returned with a tray and set it down before taking a seat next to Callan. The room suddenly went buzzing as if someone had smashed a beehive at their table.

I'm going to challenge... All of my buddies at Untethered Realms and anyone else who wants to take part. What are you working on at the moment?
Posted by Misha Gerrick at 5:27 PM

Email ThisBlogThis!Share to TwitterShare to FacebookShare to Pinterest
Labels: The War of Six Crowns