Hey all! Just a quick stop by to do a favor for my friend and fellow Untethered Realms author, River Fairchild. Isn't the cover amazing?

by River Fairchild
Book 1 of the Jewels of Chandra series 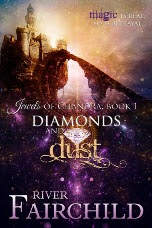 Magic is real. So is betrayal.

Two heirs. A Kingdom of dust on a troubled world. One might resurrect it. One might destroy it all.

Archaeologist David Alexander investigates the cave where his father disappeared and hurtles into another world, one filled with magic and bizarre creatures. The mad ravings in his father's journals of icemen and dragons may not be fantasies after all.

Convinced his father may still be alive, David begins a treacherous journey to find him and discover a way home. Along the way, he encounters a few unlikely friends. A Dreean warrior, a beautiful thief and a satyr join him as he searches.

David's arrival into this new world sets off an explosive chain reaction of events. Faced with powerful adversaries and few clues, he may not get the chance to rescue his father before disaster strikes, condemning both of them to death. Or worse. 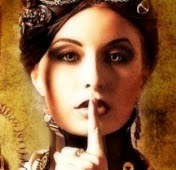 River Fairchild is somewhat odd, brandishes a dry sense of humor, owned by several cats. Lives in a fantasy world. A fabricator of magic. Makes stuff up and spins tales about it. Believes in Faerie crossings and never staying in one place for very long. Speculative Fiction wordsmith. The secret to her stories? Spread lies, blend in truths, add a pinch of snark and a dash of tears. Escape into her world. She left the porch light on so you can find your way down the rabbit hole.
Blog / Facebook / Twitter / Amazon /
Posted by Misha Gerrick at 3:11 PM