Hey all! Today I'm blog swopping with Quanie. We're sharing excerpts of our books, check mine out here. :-) 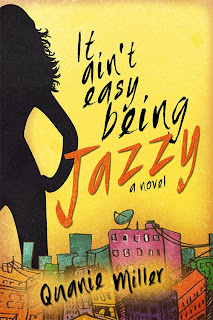 Finally, my curiosity got the best of me. I went outside because the conference room had a window. I squeezed my behind through two bushes and squatted. Yes! The blinds weren’t down all the way, so if I turned my head to the right angle, I could see…Blondie’s ass? That was no good. Wait—why was she standing? Didn’t people normally sit down at meetings? Her goons stood too, and then so did Lynnette, Rudy, and Jack. I wondered if Lynnette could take this woman. Lynnette was small, but I’ve seen her beat the shit out of a vending machine that gave her a Kit-Kat instead of the Snickers Bar she wanted. Blondie had the height advantage. And Rudy - he looked like one of those guys who always got beat up by girls in school. And Jack…he wore Bill Cosby sweaters. I knew good and well he couldn’t whup no ass. What should I do? I ran back inside and went to the kitchen. Lynnette said to give her an hour before I called for her nun-chucks. Maybe if I saved the day, she would give me a raise.

The iron. Blondie and her goons were in for a surprise because I would take that iron and…what? Crease their clothes? Or worse, make them grilled cheese sandwiches? What if they had a gun? Then I would look silly, bringing an iron to a gun fight. I would never live that down. But the anticipation made me antsy. What in the world was going on in that room? Suddenly, the conference door opened. I knew that if I wanted to eavesdrop I would have to be discrete. Too bad I tripped on my own foot and went sprawling head first into the hallway, landing right near Blondie’s stiletto. I looked up. I swear she seemed thirteen feet tall.

She said, in her deep, gurgling, sexy chicken voice, “Thanks for the Pellegrinos.” She stepped over me and so did The Slick Back Kids. Inside the conference room, Lynnette, Rudy, and Jack were all scribbling feverishly on those notepads. When Lynnette sensed she was being watched, she hopped up and shut the door. I felt like they were Desi and I was Lucy Ricardo; why couldn’t I be in the show? I ran back to my office and peeped out the window, but Blondie and her entourage were gone. I sat at my desk for the rest of the day, wondering if they were doing something illegal, and if so, why didn’t they ask me to participate?

Jazzy secretly wants to get back together with her ex-boyfriend, Curtis, so when he calls and reveals that he’s got something important to tell her, she’s got no idea that he’s about to propose—to her first cousin and bitter rival, Mercedes.

The annual family dinner is coming up, and fearing that she will spend the evening seething while Mercedes flaunts her four carat engagement ring in her face, Jazzy asks Reggie, an Adonis she met at the mall, to accompany her. As fate would have it, not only did Reggie and Mercedes used to date; that backstabbing, leopard print wearing cow is still carrying a torch for him! Revenge. It’s never been so sweet.

But falling for Reggie? Holy crap! That wasn’t part of the plan! She’s got enough on her plate as it is; restaurant shootouts, a neurotic boss, a mother who spies on the neighbors, and a sister and best friend with man problems that could land them on Jerry Springer. Who has time to fall in love? So when Curtis comes sniffing around again—this time, with an accusation that sends her blood pressure shooting through the roof—the one good nerve that Jazzy’s got left has just about run its course.

Quanie Miller grew up in New Iberia, Louisiana. She fell in love with reading at an early age and spent most of her time at the Iberia Parish Library discovering new authors like R.L. Stine and Christopher Pike (she was often found walking back home from the library with a stack of books that went up to her chin). She holds degrees from Louisiana State University and San Jose State University. She has been the recipient of the James Phelan Literary Award, the Louis King Thore Scholarship, the BEA Student Scriptwriting Award, and the Vicki Hudson Emerging Writing Prize. She loves writing humorous stories about strong willed, sassy women who can’t keep themselves out of trouble. She lives in Charleston, South Carolina with her husband and is currently, as always, working on another novel. To find out more about Quanie and her works in progress visit quanietalkswriting.com.

http://www.quanietalkswriting.com
Posted by Misha Gerrick at 8:18 AM