My New Content Plan and What That Means for My Blog

On Friday, I mentioned that I finally, after almost a year, figured out my content strategy for this blog. Honestly, it wasn't a minute too soon.

I'd been feeling like I just lost steam after my disastrous year in 2014, and my blog got lost with it. Sure, there are some of you die-hards (thank you!) who kept showing up and saying hi, but I definitely noticed a dip in my traffic. And to be honest, I really don't blame those of you who fell away.

Why? Because while I occasionally happened to post something that I felt was worth reading, it was mostly a reactionary, almost spontaneous process. Some things hit, some things missed. And because I was constantly behind on literally everything, I never knew what I wanted to write about most of the time.

My YouTube channel, incidentally, suffered from the same thing. I enjoyed writing for both this blog and for my channel, but often, I'd be at a loss and spending way too much time on figuring out what I wanted to write about. As a result, I more often than not ended up skipping altogether. Because let's face it. While blogging is awesome, it can't (and won't) be my priority. It will always come second to my books and job.

I'm not one to give up, and when I saw this book by Meera Kothand, it seemed like my blogging muse was telling me something. 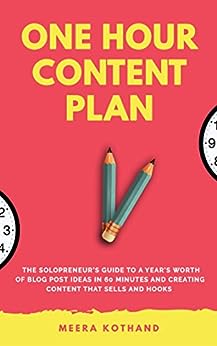 The One Hour Content Plan is mostly aimed at bloggers who actually want to directly earn money from their blogging, as opposed to only partially augmenting my other earning activities. That said, I found this book invaluable simply because it put what I was trying to achieve into perspective.

And that perspective helped me realize why I had felt that my blogging last year was unfulfilling both to me and to the readers.

It basically came down to this:


I was aiming at the wrong people.

For example, I would share my YouTube posts here, and you guys would be completely unenthusiastic about it. And I didn't really get it, because the content on my channels was the exact same thing I had been writing about basically since I came to blogging in 2010.

But that's what I realized. Many of you guys have been with me since 2010 (THANK YOU!), but you, like me, are not the same people you were back then. We grew. We gained experience. We've learned lessons. We've become better at what we do.

And if I write something that's about "how to write a book," 90% of my audience here won't care, because 90% of you guys already wrote at least one book already.

So I could revamp my blog and change everything to recycle my audience and attract more new writers, but I happen to like you guys and I want you to stick around.

And so, I'm going to play to my strengths here in a way that you guys will hopefully find interesting. The best responses I get are to my goal-driven posts, posts about the industry, posts about making it as a person making a living at this writing/editing/publishing thing. The other good responses I get (and that I don't want to lose) are to my more personal posts, because I feel that blogging still is the best way for people to know me, and giving that up would basically be missing the point. And lastly, some of my most popular posts do have writing craft and technique advice, but not the basics. Instead, you guys enjoy posts that make you say, "Hmm. I haven't really thought about it this way." or, "Oh wow. I always forget this, thanks for the reminder."

Here's the thing, though, those kinds of posts are not the ones that are popular on my YouTube channel. So I'm going to split the two. My blog will be bringing you the content I think will be the most relevant to you guys, and my YouTube Channel will be aimed at readers and new writers looking for advice from an old veteran.

To sum up, this is what I have planned for this blog for at least the next year:

I really hope that you guys will be as excited by these changes as I am about making them. If you have any thoughts, comments, or blog topic suggestions, please do leave them in the comments section below! I will definitely take a look.

So what would you like for me to write about? Yes, I do have a plan, but the plan is flexible, so I'm always game to address something if you want me to.
Posted by Misha Gerrick at 5:00 PM

Email ThisBlogThis!Share to TwitterShare to FacebookShare to Pinterest
Labels: blogging, my blog