Hi everyone! Yesterday was another crazy one at work, which is why I've been a bit quiet lately. (But I will be stopping by to visit some blogs today.) In the meantime, I just wanted to give a shout-out to writing buddy and Untethered Realms Co-Conspirator, M Pax, whose new book is out today. 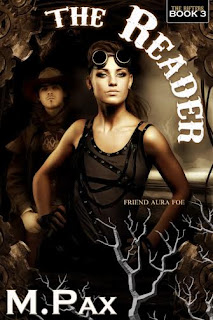 With the rift closed for the season and no more monsters to fight, Daelin Long gets bored as librarian in the podunk town of Settler, Oregon. A job interview and her brother’s arrival present a tempting opportunity to escape, until her brother and her best friend, a ghost, disappear.

While Daelin searches for them, more mysteries pile up: dead people coming back to life, portraits of the town founders replaced with strange white trees, and people on the other side of the rift returning. It’s impossible. The portal that allows monsters from other universes to come to Earth is sealed until next summer.

The Rifters, a secret group protecting our world, believe the troubles are nothing more than the tantrums of an offended ghost. Daelin disagrees. If she’s right, the evil hell-bent on destroying Earth has new technology making the rift more deadly.

Before the monster summons the next apocalypse, Daelin must find it and destroy it.

Book 3 in the Rifter series. 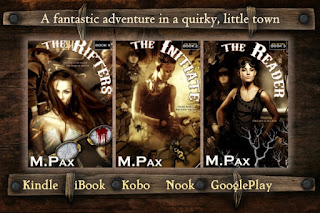 Need to catch up?

You can read books 1 & 2 in the Rifter series for free by becoming an M. Pax Reader. ENTER THE M PAX DIMENSION

M. Pax is author of the space adventure series The Backworlds, plus other novels and short stories. Fantasy, science fiction, and the weird beckon to her, and she blames Oregon, a source of endless inspiration. She docents at Pine Mountain Observatory in the summers as a star guide and has a cat with a crush on Mr. Spock. Learn more at mpaxauthor.com.
Posted by Misha Gerrick at 1:37 PM