Ah! It's nice to get a chance to share my insecurities with you all today. Although I tend to be really honest when I blog, I do try to tone down on worrying here, since I think it would really annoy you if  I shared my insecurities all the time.

But thanks for Alex, and the Insecure Writers' Support Group, all of us get to share whatever worries us once a month and everyone supports each other. And today, I get to co-host as well, so welcome one and all!

But now, let me share what's been bothering me. 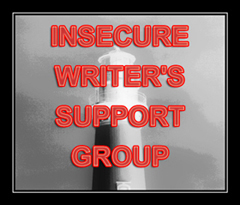 As some of you may know, I have been querying my first ever completed manuscript since September last year.

I've basically been getting "no" ever since. But here's the thing. I have a sneaking suspicion. Nothing I can prove, but that's niggling me.

I'm starting to think no one's even reading my submission.

The first few I forgive because, well. My query sucked. Now though, I have a really good one. And my book has been edited to a shine.

I've had positive feedback on the book again and again from people who never met me and who are from all walks of life and even different countries, so the safe assumption would be that my story has broad appeal.

And yet, it took five months before I got a real personal rejection. And that one opened my eyes. Because this is THE agent in my genre. Who took a week extra to decide if he'd ask for more or not. (And no, he wasn't late in responding because of being very busy. He thanked me for my patience while he decided.)

The reason why he rejected the novel actually sucks, because what he'd seen as a problem was actually an impression created by the amount of words he's requested.

Point being. He looked at my query and saw something. Why hasn't 40+ agents in two different countries? Yes, I know it's a subjective business and all that, but if THAT agent saw something and no one else does, I'm thinking there's something off.

And basically, I think my problem comes down to two words.

You see, somewhere, someone decided that it's unpublishable and therefore not sellable. (Not a conspiracy theory.) So the moment someone sees it's portal fantasy, they just dump the query.

So that leaves me wondering. Do I lie in the query and take out the bit that starts on earth? Because odds are, they'll just stop reading the moment my book starts on earth. So yeah.

I'm starting to think that traditional publishing is out for this book.

But as much as I know that this is going on, I still can't help but think that maybe my book just isn't as good as I think it is.

So. Here's my question. Anyone else been getting the feeling lately that agents aren't really reading your submissions? I'm not talking about only spending a few seconds on a query before reading or dumping. I'm talking about not even giving the author a chance.
Posted by Misha Gerrick at 12:33 PM